Posted by Goodreads on January 31, 2011
15 likes · 6 comments
Karen Russell's debut book of short stories, St. Lucy's Home for Girls Raised by Wolves, established her reputation as a young master of fantastical fiction in which performing animals, children, and teenagers often take center stage. Her new novel, Swamplandia!, elaborates on a story from that collection about a young alligator wrestler named Ava Bigtree. Taking the reader deeper into the world of the Bigtree alligator-wrestling dynasty and their struggle to save their moribund Everglades theme park, Miami-born Russell evokes a lavish quagmire filled with quirky details. On behalf of Goodreads, author and online talk-show host Emily Gould spoke to Russell about magic realism and her favorite writers. 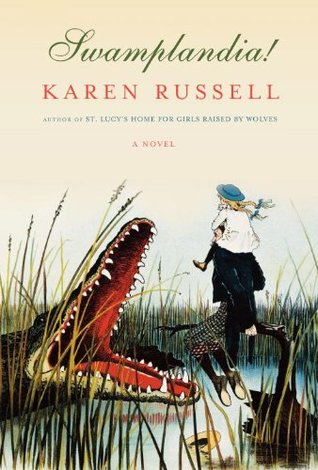 Goodreads: How did you know the story had the potential to become a novel?

Karen Russell: At one point, when I turned it in to the MFA workshop, the story that appears in St. Lucy's was 40 pages long. Everyone was like, "This is very long for a story." And I'd been having novel envy—friends were writing novels, and it seemed like they were in stable, committed relationships, and I was just...

GR: ...having one-night stands with stories?

KR: Yeah, pretty much every other story in St. Lucy's I had a great time writing, and then I could just leave with no regrets. With Ava and Ossie, when I got to the end of that story, it was still sort of humming. It felt very alive to me. And then they wouldn't shut up; they sort of stuck around. I had all this stuff about the world of Swamplandia in my head. For better or for worse, it's the book I had to write.

GR: In the midst of Swamplandia!'s dreamy, heightened world there's a core of emotional realism in your characters. How do you reconcile the magical world where your characters live with their emotional lives, which are not fantastical at all?

KR: That always feels like a challenge to me, if you want to have something whimsical or weird or different but then to continue to have something at stake for your characters. I think it helps that they feel very real to me, and even if I don't like them, I feel that I want to understand them.

GR: Goodreads member Bryan Basamanowicz writes, "After reading certain exceptional writers like yourself, Michael Chabon, and Aimee Bender, who tend toward more boundless image construction and acrobatic metaphor, I find myself suddenly unable to resist the urge to be more playful and risky in my own creative work. The results I achieve are interesting, maybe even good, but I don't know if it's my style. In your development as a writer, how did you manage the impulse to imitate your favorites? How do you know your own voice when you hear it?"

KR: I can totally relate to that. Every time I read a Borges story, for the next 24-hour period I'm just writing about minotaurs and labyrinths. Or Junot Diaz does that for me, or George Saunders, and it's tough because what I love about those voices is that they're inimitable! I've heard some writers say that they don't read other fiction writers when they're writing. We used to do these imitation exercises in my MFA program—we would read David Foster Wallace, then write stories mimicking his syntax, and whatever other ineffable stuff goes into making someone's style. And then we would read each other's, and it was like a perfect fingerprinting. We could always tell whose was whose. It almost made our tics more clear, to try to write in the style of another writer. So I thought that was pretty encouraging, insofar as there's something that's going to be sort of unique and yours about your worldview, the way you're adding up the universe, what you find funny or whatever. I do think it's possible to find whatever's idiosyncratic and best about your own voice, even if you're influenced by some writers whom you love.

GR: Goodreads member Richard Thomas asks, "When dealing with fables and magical realism, what is it that triggers each story to leave the world of reality and morph into something that is paranormal, magical, or out of the ordinary?"

KR: Growing up in south Florida, it all felt really whole cloth: You go to the grocery store, you go to the Parrot Jungle. It was a pretty seamless, indivisible reality. I was approaching it with the matter-of-fact credulity of a kid. The fiction I love often uses that sort of carnival light to cast some weird shadow. I love Saunders and Calvino—people who are able to take the incredible and make it real. Usually, though, and embarrassingly, with a lot of my stories it would be like a "what would happen if?" sort of experiment. I would start with something crazy: "What if two boys believed they had goggles that let them see ghosts?" And the reality, I guess, is that the emotional stakes of the story came later. What had started off as a jokey, playful exercise took on a new dimension. I felt, "Oh, there's something real at stake for these characters." This strained premise, this artificial setting, is going to be a place where I can stage something that has real consequences.

I always want a story to feel like its characters live in a rule-governed world of consequences. It's not like some anime film where all of a sudden the character you've cared about all along turns into bubble gum or a cat. The story is not going to violate its own rules.

GR: Do you know yet what's next for you? Another novel, back to stories?

KR: I've become wary of talking about stuff when it's in utero, for fear that months later someone will be like, "What happened to that story about rabbits of the apocalypse?" and I'll have to say, "Yeah, it didn't work out." But I am working on some stories, and this crazy Dust Bowl novel. My sister jokes about it and calls it Drylandia. The idea, I guess, is that after Swamplandia! I wanted to go somewhere as dry as possible.

KR: I wish it were more interesting, like, "I do three hours of hot yoga, and I take my hot air balloon up and come back down." Writing is the least glamorous, most boring job. I did have an amazing experience last year: I had the von der Heyden fellowship at the New York Public Library. It's like The Price Is Right super mega-win for fiction writers. You get this office at the New York Public Library; it's like nerd Valhalla. I had a real desk, with drawers that opened soundlessly...people would bring you cookies, you could order any book you wanted...now I'm back in my old Starbucks. It's like a video game where you have a superpower for a little while and then it runs out.

I try to write for four hours in the morning. It sounds like so little. The hardest part for me is just staying with it when it really feels bad. When I feel like I'm writing terribly, not getting distracted, not giving up. But I really envy those people who get up at dawn and write 3,000 words a day. Sometimes my big victory is deleting a bad joke about the moon or something.

KR: I love George Saunders, Katherine Dunn, Joy Williams, Kelly Link. I love people who are pushing on language in weird ways, like Affinity Konar—I loved her book The Illustrated Version of Things. And Borges.

KR: Bradford Morrow has this book out right now called The Diviner's Tale. And Kevin Brockmeier's The Illumination.

Interview by Emily Gould for Goodreads. She is the author of And the Heart Says Whatever and the host of the online book talk show Cooking the Books.

Learn more about Emily and follow what she's reading.

Thanks for the interview and the wonderful answer, Karen. Big fan of your work and your approach to writing is inspiring. Best of luck.

great interview;can't wait to read the book. I think there is a Florida unnatural realism in life here and in the best of the writing.

I love this. It's great.

Can you share to me, How the way to became a popular writer & what's inspiring to choice the best tittle.

it's very good interview.
i love this .

Thanks for the excellent interview. I just finished Swamplandia! and loved it. Not surprised Karen is a Saunders fan. Initially I thought the book would be mostly comic, quirky but I soon felt the depth of the characters. I especially loved Ossie and her meeting LT. One of those books I hate to end. I already miss Ava, Kiwi and Os