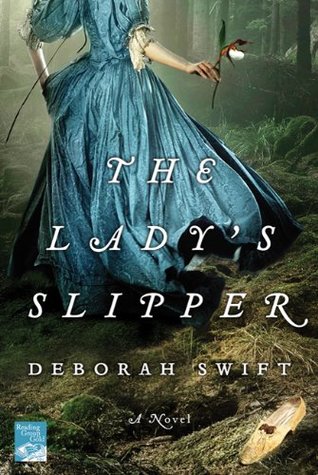 Betrayal, murder, greed—grave sins are committed for the sake of a fragile flower in Deborah Swift's first novel, The Lady's Slipper. Named after the rare and coveted orchid of the same name, this historical work starts out quietly in 1660 with still life painter Alice Ibbetson. When Ibbetson steals an orchid from her neighbor's land, she sets off a string of turbulent events tied to lingering antiroyalist tension and the birth of the Quaker movement. Although she would never call herself a naturalist, Swift shares some snapshots from her research into orchids and the 17th century. 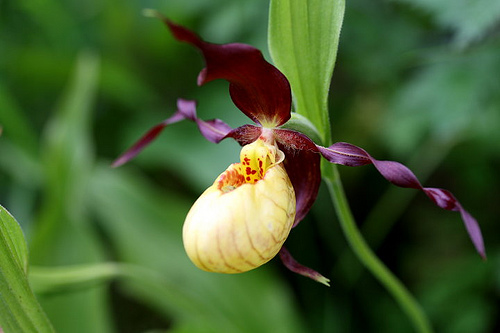 The lady's slipper orchid (photo by Jim Horsfall)
Goodreads: Once thought extinct, the lady's slipper now has multiple organizations dedicated to its preservation. How does one plant generate such fervent love?

Deborah Swift: It is the most visually dramatic of all the English wildflowers, and there is nothing else remotely like it growing wild, although it is common in other parts of the world. Like all orchids, it combines the innocence of the wildflower with the sensual connotations of its structure, and this inherent tension seems to make it very attractive. Its rarity and fragility also add to its appeal.

I came across the orchid quite by chance whilst on a Sunday walk. A volunteer from one of the environmental associations was standing guard over it, which was intriguing. He explained that it was the last one of its kind and escorted us to take a look. I had never seen anything like it, and my initial reaction was how strange it was in amongst our other woodland plants—the shoe-like petal and the flaring scarlet ribbons. I understood in that moment something of the collector's desire to possess it. But realizing it was reduced to a single plant, I was sad that something so beautiful and once so common in our landscape had suddenly taken on the nature of an exhibit at a museum. That encounter inspired the novel—my attempt to catch something of the orchid's magic before it disappeared. 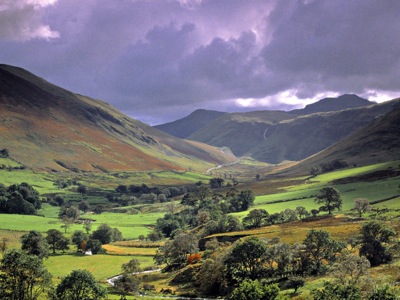 Lake District, Cumbria, England
GR: Are you a nature enthusiast, and do you cultivate orchids or other plants?

DS: I would love to be able to say I am a keen gardener, but unfortunately I have never had green fingers, and even my houseplants look at me in despair! I have to admit that manicured gardens do not hold as much appeal for me as the natural landscape. I am passionate about the countryside, though. I love the untamed places in the Lake District where I live, and there is something in me that longs to be out in the wild, a place where I shrink to my proper scale and perspective.

Researching the botany for the novel was fascinating, as lady's slipper seeds are minute and very difficult to grow. To preserve the species today they have been cloned from the original plant. In the laboratory they are fed special combinations of nutrients similar to those given to newborn babies, and each plant can have five years of care before it is strong enough to be put back carefully into the wild, and then a volunteer will be assigned to monitor it. Few people realize how much work goes on behind closed doors to conserve our native species. Interestingly, all the new generation of lady's slippers have been planted out by women, in keeping with the name. 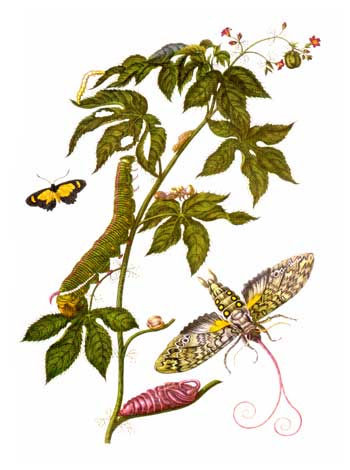 Illustration by Maria Sibylla Merian taken from Metamorphosis insectorum Surinamensium
GR: What was your inspiration for Alice, an artist and botanist? How did you develop this main character?

DS: Whilst researching Alice I looked at the wonderful watercolor paintings of Maria Sibylla Merian, who was her contemporary, and also the life and notebooks of Mary Beale, the first professional woman artist from this period. I chose to make Alice an artist to make her obsession with the orchid more credible. I realized her desire to preserve it would be stronger if it was present in more than one way. So I made her someone who would see the outer form and want to capture its beauty in paint, but I also made her the daughter of a man who was one of the early botanists, a man such as Culpeper who would have a more scientific interest in the plant. This makes Alice doubly attracted to the lady's slipper. In addition, the loss of her family during the Civil War prompts her to want to preserve or nurture something at an instinctive level. Alice grew as I was writing her, and I was fascinated to discover she found new resources as the novel progressed.

GR: Lingering bitterness from the Civil War and the birth of the Quaker movement made 17th century England a tumultuous time. What intrigued you about this period and place?

DS: For a writer, the 17th century is a gift. It has conflict at almost every level—social, political, and religious. In this extraordinary time the English went to war with themselves and in doing so had to address the deeper question of who or what they served. If it was God, what sort of a God and where was he to be found? If it was an ideal of England, how might they preserve it?

In a country rife with torn allegiances, where suspicion seeps into the very fabric of village life, a hasty decision can have far-reaching consequences and events can quickly escalate, as Alice discovers to her cost. The persecution of the burgeoning Quaker movement, and the determination of the gentry to try to preserve the old order, gave me a chance to draw some strong male characters with conflicting motivations. My aim was to use the history to intertwine layers of tension and mistrust and produce a plot where everyone is hiding a secret from everyone else. 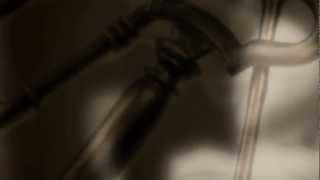