Posted by Goodreads on November 30, 2010
30 likes · 4 comments
An Aimee Bender novel or short story may begin with simple prose, but then a boyfriend devolves into an amoeba or a girl turns out to have one hand made of fire. Her contemporary fairy tales abound with surreal elements but always adhere closely to the language of emotion. Bender's short story collections The Girl in the Flammable Skirt and Willful Creatures combined tragedy with whimsy. This duality permeates her second novel, The Particular Sadness of Lemon Cake, in which a young girl can taste emotions in every bite of food she eats. The two-time winner of the Pushcart Prize and creative writing teacher at the University of Southern California in Los Angeles chatted with Goodreads about her writing habits and preferred superpowers. 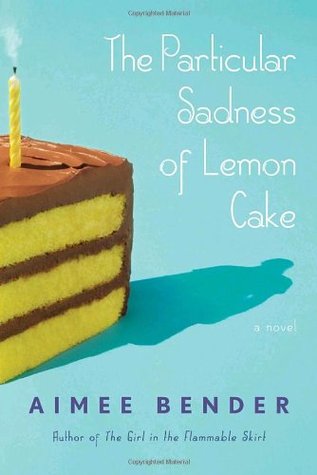 Goodreads: The Particular Sadness of Lemon Cake opens on Rose Edelstein's ninth birthday. Why this age? Did you ever consider an older starting point for her?

Aimee Bender: I considered both a younger starting point and an older starting point, but I think what I wanted was that stage when you're taking things in that are over your head but you're able to think about them a little bit. So I think of the voice as looking back, but also of her—even at nine—having some awareness of what's going on even though it's too much for her. A teenager would be in a different place and better equipped.

GR: Several Goodreads reviewers refer to Rose's ability and the peculiar abilities of her family members as superpowers. In a loose sense do you believe that we all have superpowers, that there are more ways of perceiving the world than we generally like to admit?

AB: I would agree that we all have various superpowers that we tend to use for good and for ill. That's true of everyone. I think that's why the X-Men are so appealing, because they've made concrete something that we intuitively know about each other.

GR: What would your superpower be?

AB: I can answer that question for my friends or family, but it's almost tougher to say about one's own self. Sometimes I'm good at tuning in to other people, but that's not always true. In that way, I think when the book is talking about empathy, I feel I have a pretty good capacity for empathy, but also I fail at that all the time.

GR: As a professor of creative writing at the University of Southern California, you must be able to tune in to your students. Does your teaching influence or inform your writing work at all?

AB: I love teaching a lot, and it really suits me to have that complement for the writing, but it doesn't directly inform it. It keeps a person honest, because when I'm up in front of a classroom talking about what I value about fiction, and I can remember that just that morning I didn't do this exact thing that I'm talking about. That part is helpful—bracing but helpful.

GR: Goodreads Author Jason Erik Lundberg asks, "What is it about elements of the fantastic/surreal/irreal that keep you returning to them in your fiction?"

AB: For one, it still feels like a thrill that it's allowed, because it's the type of fiction or film that I'm really drawn to. I like to think of things metaphorically, but not in an easy metaphorical way. I like seeing the world refracted through a different lens. So it still feels really fun for me to try that out. In some ways because it's really physical. It's a way that I can tell a story through this physical change. It gives me something to work with.

GR: Goodreads Author Adele Griffin says, "I am such a superfan, I think I've read everything you ever wrote. I think you are one of today's best young adult writers who is not writing into the young adult genre. What is it about that youthful narrative voice that appeals to you?"

AB: Thank you! I like reading books that are from the point of view of kids or adolescents, because there's something about how kids will grasp a lot but also aren't fully equipped to articulate what's going on. There's something about that gap that I find really compelling. To think about that awareness and lack of awareness at the same time. I used to teach kids, and I find kids extremely entertaining. I guess there is something fun about trying to reimagine the world that way and get back in touch with what it was like.

GR: In a nutshell, what do you love about writing fiction?

AB: The thing I love the most is the discovery, because I think writing is a way to access ideas or situations that I can't really just think up on my own. I think when I'm surprised by something, that's what I love the most.

GR: You've gained recognition as both a short story writer and a novelist. Is your approach to each format very different?

AB: It does feel very different because my experience with novel writing is that it takes me a while to find the thread that can pull along for the length of 200-plus pages. It's just not clear to me for a while what that might be. With a story, I can start something, and it can have two pages in it and that's OK. So it's a little easier to start something out, and it will finish on its own accord. The novel does not.

GR: How do you know when a story or a novel is finished?

AB: With a novel it takes a while for me to accumulate enough scenes, and then there's an enormous amount of reading, rereading, and sorting scenes next to each other before I can get a sense of what the book is. It's a much more strenuous process for me. With stories, sometimes they'll finish, and I'll just know it in the moment or sometimes they'll percolate for years without an ending, and then over time I'll work my way to the ending point.

GR: Goodreads Author Kate Evans asks, "What's the one thing about her books she would most like her readers to know?"

AB: I want the readers to have some kind of experience, and it's OK if they can't articulate what that experience is or what it means to them. I would hope that it just sits with them and that over time it becomes clearer. It doesn't have to be understood in an intellectual way. Sometimes people will ask about meaning, in particular with something magical. "What's the meaning or what does the symbol mean?" The first question for me is, "What does it feel like?" or "What's the impact?" as opposed to "What's the meaning?"

AB: I have a very strict routine. I wake up in the morning, and I go straight to the computer. I usually check e-mail but then write for two hours, often to the minute because I want to stop. The rule is two hours. I am very strict about the time. I have a pad of paper next to my computer, and it just has times on it. 9:17 or 10:02 or whatever. That part feels rigid, and the rest I can sit and daydream. That's fine.

AB: Lots of them. I love fairy tales. I love Donald Barthelme. I love Linda Berry. I love Marilynne Robinson. I love poetry. I love poetry by Wallace Stevens. I love plays by Ionesco and Caryl Churchill. I would say probably the running theme for most of them is there's something strange in the storytelling a little bit. Like you're being thrown into an experience.

AB: I just finished Never Let Me Go, the Ishiguro book. I was a little late to the game. That was an amazing book, and I just love seeing how writers who are careful with language are doing something kind of strange. That's a strange book.

I also just finished a graphic novel by Gabrielle Bell. I'm also reading some stories by Jim Shepard. They're great.

AB: I'm working on stories and also sniffing around for a new novel beginning. Sniffing.

It's encouraging to find a writer whose process (particularly with the novel) is similar to one's own. Now I know I'm not alone in the struggle to sort through scenes to find the thread and figure out what the book is about. Thanks, Amy.

Thanks for this.
I am excited to get the book and read it over the holiday.