"In Bed" with Sebastian Junger

Writing is an extreme sport for Sebastian Junger. In search of stories, the journalist and author has traveled to Liberia, Sierra Leone, Kosovo, Kashmir, and other turbulent locales. Known for his best-seller The Perfect Storm, which chronicles the plight of fishermen lost in 1991's "storm of the century," Junger spent 15 months shadowing a platoon of soldiers in Afghanistan's Korengal Valley—one of the U.S. military's most dangerous postings—in preparation for his newest project, War. Junger shares the books, fiction and nonfiction, that he considers to be powerful accounts of life on and off the battlefield.

"Probably the most trenchant and beautifully written account of the Vietnam war by a civilian. Herr's perceptions not only about the army but about the United States in that time period are unparalleled."

The Things They Carried by Tim O'Brien

"O'Brien's collection of short stories was perhaps the first book of short fiction that imparted to the reader some feeling of what it was like to be a grunt in Vietnam. This book isn't about the war; it is the war. Only a soldier could have written this."

For Whom the Bell Tolls by Ernest Hemingway

"The classic novel of the Spanish Civil War. Hemingway tells the story of an idealistic young American, Robert Jordan, who volunteered to help fight fascism in Spain in the 1930s. This novel will either make you want to volunteer to fight fascism, or become a writer, or both."

Johnny Got His Gun by Dalton Trumbo

"The rallying point for a generation of antiwar leftists in the late 1930s. The book is based on a true story about a soldier who lost all his limbs and all his senses to an artillery shell. Trumbo imagines what it's like for that soldier to be trapped inside his mind, unable to escape and unable to kill himself. This story is more or less the most devastating indictment of war I've ever read."

Homage to Catalonia by George Orwell

"A moving biographical account of Orwell's adventures in Spain during the Civil War. He saw very little action, but Orwell caught the political complexities of a civil war—which are fully as dangerous as the combat. His tour ended when he was shot in the throat by a sniper. There is probably no better account of idealism confronting the complicated and disappointing realities of modern war."

Great list "The Things They Carried" also made me look at the possibilities of writing differently. I've used it in most writing classes I've taught since.

I'd also add "All Quiet On The Western Front." I was never in battle, but I was an infantry soldier, and it sure rang true to my experience.

I've been reading "War" the past few weeks (I share the same publisher, and begged for an advance copy), and it's powerful as hell. It way well appear on lists like this one day.

Good job. All masterpieces. Could I also mention three lesser-known novels? Philip Caputo's Delcorso's Gallery and Horn of Africa are both excellent, as is William Holland's Let a Soldier Die.

Strong list and added suggestions. Consider also Crane's "The Red Badge of Courage" and Kantor's "Andersonville" concerning the Civil War, Roberts' "Arundel" set in 1775, and Mailer's ":The Naked and the Dead," set in WWII's Pacific theater.

I have read most of those and it is a good list. I also found the depictions of war in Cold Mountain by Charles Frazier, Birdsong by Sebastian Faulks and also in Corelli's Mandolin by Louis de Bernieres particularly vivid -- I read all three one summer, starting with the Civil War (Cold Mountain), Birdsong (WWI) and Corelli's Mandoline (WWII) and found the descriptions of war to be very similar (and awful) in all three.

Morgan wrote: "I have read most of those and it is a good list. I also found the depictions of war in Cold Mountain by Charles Frazier, Birdsong by Sebastian Faulks and also in Corelli's Mandolin by Louis de Ber..."

Thank you. Nice reasoning for your recommendations. I'm going to do what you did. I haven't previously been interested in war books. I will expand my interest based on your post.

I know war is a dirty bussiness it is only in films that we glamourise it.I have been in it for ten long
years (SRI LANKA & KASHMIR VALLEY) as a special forces young officer& something very useful& handy which i would recommend for any one who is being inducted in battle is:MEN AGAINST FIRE-BY
GEN SLA MARSHALL.

Ranbir, interesting suggestion. I just learned Marshall did research on WWII soldiers and found that 75 percent did not fire their weapons to kill even though in combat and under direct threat. You site his most famous among the 30 books he wrote. Marshall never fought; he was an Army historian, researcher and analyst whose careers spanned WWII, the Korean War, and the Vietnam War.

Tom,thanks on the info on Gen marshall but surprised at the same time to learn that in US army you can be promoted to a gen officers rank without ever fighting the battle.

Debora,most of the people who write on war have themselves never been in battle.However there r a few exceptions who switch over 2 writing like earnest hemingway.Incidentaly edgar riceburrough who wrote so much on africa,on Tarzan & other adventure stories about africa had never visited africa.

A very interesting short novel called "Kitchener's Mob: the Adventures of an American in the British Army" is very, very good in realizing the mind set of the young soldier in WW1. Written in 1916, available for just a couple of dollars on Kindle. Journal style.
Cheers -

I second the rec on MEN AGAINST FIRE. Incredible book.

And when I was in Officer Candidate School in 1983 at the Infantry School in Ft. Benning, copies of that book were everywhere. It was highly respected, and I assume it still is.

Dave,thanks for ur info about the popularity of the book at fort benning i had recommended the same to be included for study at the infantry school MHOW,(MP),INDIA.However our redtapeisam is our waterloo.

Your welks. I was assigned it as an undergrad at U of Illinois earlier, where my really great prof said it was THE classic on the subject. It bore that out.

I haven't read War yet, but I saw the film Restrepo. I still can see some images and will probably always see them. Not all were bad--soldiers sleeping on the ground and anywhere else they could find. War is indeed awful. When I learned of Tim Heatherington's death, I was devastated. I felt that I knew him to a certain extent because of the movie. Such a waste.

The Old Testament is a good start! 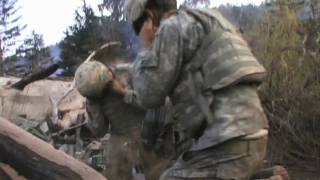