"In Bed" with Brad Kessler 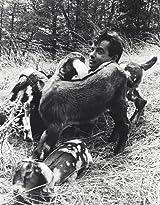 Since Henry David Thoreau wrote from the shore of Walden Pond, "Simplicity, simplicity, simplicity!", philosophers and romantics have dreamed of opting out of our increasingly frenzied modern life. City dweller Brad Kessler, author of Birds in Fall, recently left Manhattan in search of tranquility in the wilds of Vermont. His new book, Goat Song, chronicles his pastoral transformation as he learns how to keep goats and make cheese. Kessler shared his favorite books about listening to the rhythm of nature.

"Thoreau conflates literary culture with agriculture. There's gold on every page. Forge through the first chapter on Economy, and the story begins again as an adventure story—a man building a cabin in the woods."

Growth of the Soil
by Knut Hamsun

"Another man building a home in the woods, this time in the wilderness of the Norwegian north. An epic simply told in almost Biblical style. Wonderful chapters on work and peasant life."

"Dillard broke form with this 1974 classic. Pilgrim is a book of wonder. Dillard enters the woods around Roanoke, Virginia, wide-eyed, agape, with all her senses on. Thoreau wrote: 'I have never met a man who was quite awake. How could I have looked him in the face?' Dillard is that man, and she happens to be a woman."

The Narrow Road to the Deep North by Matsuo Basho

"A book about walking and weather, mountains and rivers and skies. Basho's 17th-century travelogue is written in a form called Haibun, prose inlaid with haikus. Basho shows that a haiku can express as much—more—than a page of prose. It's not the amount of words you throw at a given thing—but the words one chooses."

"The first book in Berger's beautiful trilogy, Into Their Labors (Pig Earth, Once in Europa, Lilac and Flag). All three are worth reading. They tell of a small village in the French Alps and what becomes of its people over the course of the 20th century. A book about work, the earth, human migration, love, death, and storytelling."