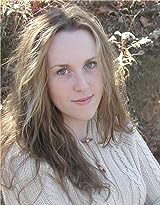 Each month we seek out a hidden gem from the vast Goodreads catalog, focusing on debut authors, independent publishers, and other literary folk not yet on the best-seller lists.

Amy Greene grew up in the heart of Tennesse's Smoky Mountains. Steeped in the folk magic of her native Appalachia, her debut novel, Bloodroot, is an epic tale of four generations of a family who live, struggle, love, and go mad on Bloodroot Mountain. Goodreads member Pamela says, "[This book] is vicious, and by the second half of the novel, I had to remind myself to breathe while reading." Greene shared with Goodreads a snapshot of the lush view from her childhood home in Morristown, Tennessee.

Goodreads: The central character of Bloodroot, Myra Lamb, has a special, bewitching skill dubbed "the touch." Have you personally experienced this folkloric power?

Amy Greene: I was inspired to write about this kind of magic by the stories I grew up hearing, of ghosts and fortune-tellers and witches. There are those in my own family who were rumored to have the touch, like my great-aunt who removed warts by rubbing stones in a circle around each one and then throwing the stones away, and my aunt who was rumored to heal by laying her hands on the sick. I've never experienced it myself, although I do think writing is a kind of magic.

Add Bloodroot to my books »

GR: Appalachia has long struggled with poverty and also many negative stereotypes about the isolated local culture. Do you hope your writing will shine a light on what life is actually like in your native region?

AG: I wrote Bloodroot to tell the stories of the characters I created and wanted to learn more about, but in the process my perspective of where I come from seeped into the narrative. While I did address social issues in Bloodroot, such as the poverty that still persists in parts of Appalachia, I hope what comes through most in my writing is the beauty of the land and the rich tradition of folk belief that make Appalachia such a magical place to live.

I am reading this novel and have found it fascinating.I feel as if I know the characters. The dialect and belief
in ghosts,healers with the touch and fortune-tellers.