Neil Gaiman's imaginary worlds are indisputably dark, often chillingly macabre, and always fun to visit. His characters are spooky but charming, like Death, the beguiling goth girl of the groundbreaking comic series The Sandman; the Other Mother, the soul-snatching matriarch of the young adult bestseller Coraline; and Aziraphale and Crowley, the angel and demon frenemies of the popular satire Good Omens. Gaiman chatted with Goodreads about his latest spine-tingling book, The Graveyard Book, his sources of inspiration, the Hollywood rumor mill, and what he has on his Goodreads currently-reading shelf.
Goodreads: You are a very busy guy: a new book, The Graveyard Book, a new movie, Coraline with Dakota Fanning, and a buzzworthy new Batman comic in the works. What's next?

Neil Gaiman: I'm about to go off on a secret researching expedition around the world for the next book. It's a longish journey. The first stage of it is going to be China. I've always wanted to do a nonfiction book — a travel book.

GR: Let's talk about your new book. What inspired the story for The Graveyard Book?

NG: Twenty-three years ago, we lived in a little Sussex town in a tall house across the lane from a graveyard. We didn't have a garden, and our 18-month-old son loved riding a tricycle. If he tried riding in the house he would have died because there were stairs everywhere, so every day I would take him down our precipitous stairs, and he would ride his little tricycle round and round the gravestones. As I watched him happily toddling I would think about how incredibly at home he looked. I thought that I could do something like The Jungle Book with that same equation of boy, orphaned, growing up somewhere else, but I could do it in a graveyard. I had that idea when I was 24 years old. I sat down and tried writing it and thought, "This is a really good idea, and this isn't very good writing. I'm not good enough for this yet, and I will put it off until I'm better."

And I'm glad I waited. I think it's a better book than I set out to write 23 years ago, and I feel like the gods smiled on me, and I got very lucky. Normally, in anything I do, I'm fairly miserable. I do it, and I get grumpy because there is a huge, vast gulf, this aching disparity, between the platonic ideal of the project that was living in my head, and the small, sad, wizened, shaking, squeaking thing that I actually produce. And then there is The Graveyard Book, which is, I think, the first time I've felt really satisfied.

GR: So is this truly a story for both children and adults? Did you have a young audience in mind when you wrote it?

NG: I had a very limited audience in mind: me. I'm not sure I've ever written anything so much to please myself. When it was done, I gave it to people to read, and various publishers decided that kids like it, but adults like it in a completely different way, and we had to figure out how we could market it to both.

GR: So many of your books walk the boundary between the real and the supernatural. Have you ever had a supernatural experience?

NG: You don't get explanations in real life. You just get moments that are absolutely, utterly, inexplicably odd. Like everybody in the world, I've had moments that are absolutely, utterly, inexplicably odd. I actually wrote about one of them in my latest book, Fragile Things. There's a true-life ghost story about running into a gypsy woman dressed as if she was from a previous century outside my front door. And maybe she was. There's a wonderful author named Robert Aickman who wrote what he described as "strange stories." They were more or less ghost stories, but they always lacked explanation.

NG: I really love radio plays, because they have that wonderful live drama thing, and you get the listener to do the thing that novel readers do, where they're actually building the worlds in their heads. There's a moment in the original Hitchhiker's Guide to the Galaxy — I remember listening to it as a teenager — where Arthur Dent says, "Ford, you're turning into an infinite number of penguins." And I realized with delight that that was a moment that really only works properly in radio. It didn't work in the TV adaptation, it was just a clever thing to say in the book, and they didn't even try it in the film. But on radio, the moment that Ford turns into an infinite number of penguins — the first time I heard that line is something I will treasure forever.

GR: You've worked with a large number of amazing artists, including long-time collaborator Dave McKean. Do you ever draw yourself?

NG: I do, but I almost never let anybody see it. I draw for pleasure only — I think because I get to work with the likes of P. Craig Russell and Dave McKean, these people who are absolutely brilliant.

GR: Let's go back a few years to The Sandman comic series, which took 2,000 pages and almost a decade of your career to date. Do you have any plans or aspirations to take on a project of this scope in the future?

NG: No! I'm so proud of Sandman. It really did take about 10 years of my life to do. It's collected in The Absolute Sandmans, which together weigh about 30 pounds, and if you drop them on somebody you will do serious damage. It definitely didn't leave me thinking, "I need to write more giant things." Depending on how long I get to live, I will probably get to do another two, maybe even three, more American Gods books, and they are all great, big things, 500 to 600-page books, so it will probably be that length. But I can't imagine doing anything that takes up my life and my headspace in the same way that Sandman did. There were times when what was going on in Sandman was much more real to me than anything that was going on in the world outside, just because I was spending more time with these characters.

GR: You've seen several of your books adapted to film: Stardust, MirrorMask, Beowulf and now the new stop-motion animation, Coraline. What's your reaction seeing your stories onscreen? Is it a good feeling?

NG: Mostly it's good. Mostly you're thrilled. And occasionally you look at it and think, "No, not like that," but mostly it's thrilling and lovely. I'd seen the first half of Coraline — really sweet, and really lovely, but not terribly scary. So they sent me some of the sequences toward the end, and they are actually quite scary!

GR: Any news on your involvement with a film version of Dr. Strange with director Guillermo del Toro?

NG: Only a rumor, unfortunately. Guillermo would love to do it. The last time we spoke to Marvel, they would love to do it. I would love to do it with them. But Guillermo is in New Zealand working on The Hobbit, which is probably two movies, not one. So, I would not write it off, and I think it is quite possible that in three years time, Guillermo will phone me up [Gaiman does a convincing del Toro impression]: "Neil, are you still interested in doing Dr. Strange with me?" and I will say, "Guillermo, I will do anything with you," and we'll go off and do it together. But it's certainly not happening right now.

GR: Awards and fame aside, which of your books gave you the greatest sense of personal satisfaction?

NG: I loved The Comical Tragedy or Tragical Comedy of Mr. Punch, which was a graphic novel with Dave McKean. I felt very very proud of that. I set out to try to do something interesting, and actually did it. I love The Graveyard Book, and with that sense of amazing pride that one occasionally has — I'm normally not proud of my stuff. The rest of them, anything else, is sort of like asking me, "Which of your children are your favorites?" It doesn't really work like that; there is no answer. You love all of them in their own special way. Sometimes I feel like I love the ones that nobody else loves, even more because nobody else loves them — the little broken-back short stories that never quite got off the ground.

NG: The last thing I read for pleasure was an amazing book by Margo Lanagan called Tender Morsels, which is theoretically a YA novel, but it's one of those things where I have absolutely no idea why it's being sold and marketed as a YA novel. Not just because it begins with an incestuous situation, a young girl who's been raped by her father. It's just incredibly powerful and incredibly beautifully written fiction.

I'm reading Scott McCloud's Black and White collection of Zot!, which is rather wonderful. I'd love to recommend Cory Doctorow's book, Little Brother. I was incredibly impressed. And the next thing I'm really looking forward to reading for pleasure is Markus Zusak's The Book Thief along with Oliver Morton's book, Eating the Sun. They are both sitting there, waiting to be read. And I'm having an amazing time reading Jules Feiffer's Explainers, complete Village Voice strips from 1956 to 1966. I'm having an enormous amount of fun dipping into it every couple of days, but I moved it on Goodreads from currently-reading to read, because I felt kind of guilty leaving that there forever.

GR: There is some pressure if you leave anything on the currently-reading shelf for too long, isn't there?

NG: There is. I read four or five of these marvelous strips a day and then stop there, because you just want it to keep going forever. So I moved it. Otherwise people will think I've forgotten it.

GR: Thank you so much for talking with us. We're thrilled to have you on Goodreads! We'll be watching what you put on your to-read shelf next.

Ahh, I really hope he tells us what he thinks of 'The Book Thief'!

Nice job for getting the interview, Goodreads!

I'd love to hear Neil do a del Toro impression 8)

One of my favorite authors! It's a nice interview indeed.

Haha! I love you Neil. Great interview Goodreads, thanks.

Ha, I didn't realise that was actually Neil Gaiman adding books in 'to-read' and 'currently-reading'. Awesome. Keep up the good work, Neil.

I think the most beautiful about this guy is you have the feeling that he is very transparent. He's always on twitter, sometimes he answers on tumblr, and his inteviews and blogs are always a joy to read. It's like living in a different world when you're following Neil. I'm so glad I was able to meet him. :) God bless Neil :)

Flagging a post will send it to the Goodreads Customer Care team for review. We take abuse seriously in our discussion boards. Only flag comments that clearly need our attention. As a general rule we do not censor any content on the site. The only content we will consider removing is spam, slanderous attacks on other members, or extremely offensive content (eg. pornography, pro-Nazi, child abuse, etc). We will not remove any content for bad language alone, or being critical of a particular book.
Author Interviews
All News & Interviews 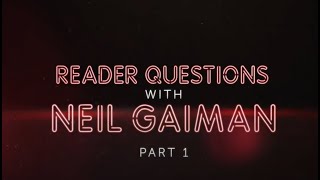