Posted by Cybil on January 3, 2018
29 likes · 17 comments
Adam Grant is the New York Times bestselling author of Originals, Give and Take, and Option B with Sheryl Sandberg. He shares monthly insights on work and psychology in his newsletter, GRANTED. Here he tells us how to deal with our 'inner teenagers' to help us succeed at keeping our New Year's resolutions: 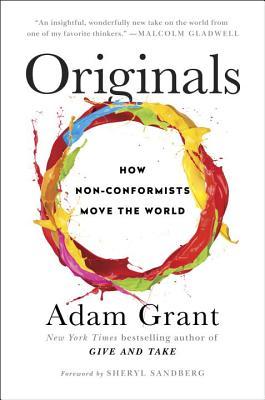 Error rating book. Refresh and try again.
Rate this book
Clear rating
1 of 5 stars2 of 5 stars3 of 5 stars4 of 5 stars5 of 5 stars
Face it: By next month, your New Year's resolution will be an epic fail. Four out of five people give up by February (and let's be honest, the fifth probably gamed the system by not making one at all). This drives you crazy if you're the kind of person who takes pride in following through on commitments. No matter how much you struggle through a book, you refuse to give up on it—which is the only possible explanation for the fact that there are humans who have read both Finnegan's Wake and Twilight.

The problem with resolutions is that they're mostly things our adult brains know we should do, but we still have a teenage brain saying we don't want to. The teenager wants to stay in bed and eat a burger. The adult knows you should go to the gym, have the salad, organize your closet, and call your parents. When the two brains duke it out, the teenager ultimately prevails. But there's hope for the adult: outwitting the teenager with three strategies from social science (which you can do because teenagers rarely read psychology or behavioral economics).

1. Reward the teenager for adulting. If you were motivated to build a beach body or eat better, you would've already done it. The key is to turn the should into an enjoyable want. My colleagues gave people an iPod with riveting audiobooks of their choice, ranging from Harry Potter to The Da Vinci Code. The catch: the iPod was locked at the gym, so they could only listen if they showed up. Over the next month and a half, they averaged 27% more gym visits.

2. Make the teenager responsible for others. The great thing about your teenage brain is that it's terrified of letting people down. No one wants to be the babysitter who gets fired twice. Erma Bombeck said it best: Guilt is the gift that keeps on giving.

When students thought about how math skills could benefit others—not just themselves—they finished 36% more boring math problems. When doctors and nurses were reminded that hand hygiene would protect patients—not just themselves—they washed 10% more often and used 45% more soap and gel. And I keep noticing that when I think about being a good role model for my 4-year-old son, I'm less likely to eat his Goldfish crackers off the floor.

3. Show the teenager future consequences. Your teenage brain is drawn to wants because it's stuck in the present. If your resolution is to save more money this year, you just need a clearer view of the future you. When psychologists took people's pictures and digitally aged them so they could see what they might look like decades later, they nearly tripled their retirement savings.

So if you want to keep a resolution, try bundling it with a tempting book and making it for others, not just yourself. And if that fails, just imagine how ignorant, lonely, and decrepit you'll be in the future if you don't follow through on your goals to read, connect, and exercise in 2018.


Check out the Adam Grant's books and follow him here.


Want to make a resolution to read more books in 2018? Here's how Goodreads is helping you achieve your goals.

The best resolution advice I've ever received! For several years, I haven't made any resolutions because I have no willpower. None. But one or more of these tips might help me make it through--or at least into February.

My new catch phrase this year is Goals not Resolutions.

warning, rant!
I agree, you have to outsmart yourself by finding what works for you. Willpower some have, others have funpower and puzzlepower.

Guilt is a danger zone. Some of the strategies mentioned by the author might work for the guilt motivated. Many I know, avoid guilt and confrontations. Some get severe depressions from guilt and resolving one guilt doesn't remove the depression because of all the other guilts left on their shoulders.

For some the, you-never-call guilt load that your "pick relative" nags you with, may be resolved by agreeing on a recurring special day and hour that suits both of you.

Getting a story only IF you work out in a gym doesn't motivate me at first sight. I need a story that instils me with a need to move and do. Not a challenge, but a way to trick myself it is not just moving. Zombies run is an app for those zombie apocalyptic story lovers. You pick your music and survive. I didn't even like the zombie genre but the story is fun. It made me move.

Hiding and finding caches or clues is a great motivator to do something boring. Getting my son to pick up his lego was a war I lost every time. If I'd only been smart enough and had energy enough to turn chores into games. Would have worked some of the time I think. The clues are not revealed until you have picked up all your clothes (or similar). Geocaching can be fun too if moving more is your resolution but going to a gym is not an option.

I'm humbly writing on a script for an app for children. It's about curiosity, saving the world and adventure. My resolution and motivator is to practice writing. I'm not a writer only a reader. Never written a script. Had to be something I am passionate about.

I found I needed to write a story that might make some kids less sedentary and building some confidence and having fun. It will not be about measuring yourself against others or focusing on weight nor urging them to eat healthy. No bartering, pointers and no guilt. This is a story for the ones who needs their imaginations fulfilled, need a story to move them, literally.

As I get older, I notice I get more willpower to keep certain habits and stick to resolutions. It's definitely this battle between my adult self and my teenage self that doesn't want to act like an adult yet (ever).

I agree that not everyone goes to an end with the resolution. But the truth is that people just give up too soon. They think that it`s so simple to give a promise and keep it. And as a practice shows, by next month, the New Year's resolution will be an epic fail. So, to resist the urge to give up, read different inspiring books, translated by TheWordPoin , write down your achievements and keep a resolution.

This is one very interesting post. I like the way you write and I will bookmark your blog to my favorites.메이저놀이터