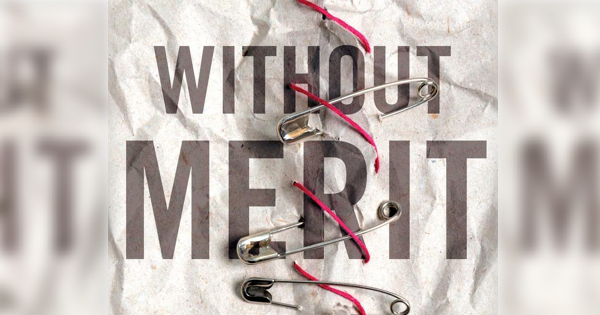 A new Colleen Hoover novel is a big deal around here. The bestselling author's last two books, It Ends with Us and Confess, both took home the Goodreads Choice Award for Best Romance. Her latest, Without Merit, hits bookshelves next month (just in time to be eligible for this year's Choice awards). The powerful tale about a young woman who bares her darkest secrets to her seemingly happy loved ones is drawing comparisons to the works of Liane Moriarty and Jojo Moyes. Hoover shares an exclusive excerpt with Goodreads.


I can't think of a single instance where I've been looked at like he's looking at me right now. Like I fascinate him. I know we don't know each other at all and whatever this connection is between us will probably be ruined the moment we have our first real conversation. He'll probably be a douchebag or he'll think I'm weird and then it'll get awkward and we'll be more happy to go our separate ways. That's how my interactions with guys usually go. But right now in this moment, knowing nothing about him other than the intensity in his expression, it allows me to imagine he's perfect. I pretend he's smart and respectful and funny and artistic. Because he would be all those things if he were the perfect guy. I'm content with imagining he possesses these qualities for as long as he's going to stand here in front of me.

Error rating book. Refresh and try again.
Rate this book
Clear rating
1 of 5 stars2 of 5 stars3 of 5 stars4 of 5 stars5 of 5 stars
He takes a step closer to me and it suddenly feels like I've swallowed his heart because I have all these extra beats in my chest. His eyes drop to my mouth and I'm certain he's about to kiss me. I hope he is. Which is odd because I've literally only spoken a couple of sentences to him but I want him to kiss me while I'm imagining him to be perfect, because that means his kiss would probably be perfect, too.

His fingers feather up my wrist but it feels more like he has both fists clasped tightly around my lungs. My chills chase his fingers up my arm until his hand is resting against my neck.

I don't know how I'm still standing with the unreliable legs I seem to have right now. My head is tilted back and his mouth is inches from mine, as if he's hesitating. He smiles and whispers, "You bury me."

I have no idea what those words mean, but I like them. And I like how his lips connect softly with mine right after he finishes saying whatever it was he just said. And I was right. It's perfect. So perfect, it feels like the old days in the movies when the male lead would press his hand against the woman's back and she would curve her body backward against the pressure of his kiss like the letter C while he pulls her against him. It's just like that.

He's pulling me to him when his tongue slides across my lips. And just like in the movies, my arms are dangling at my sides until I realize how much I want to be in this with him and finally begin to kiss him back. He tastes like mint ice cream and it's perfect because this moment ranks high on my scale of favorites, right up there with dessert. This is almost comical—this stranger, kissing me as if it were the last thing left on his bucket list. It makes me wonder what compelled him to do this.

Both of his hands move to hold my face now, like we have nowhere else to be today. He's not in a hurry with his kiss and he definitely doesn't care who sees this because we're in the middle of the town square and two people have already honked at us. I wrap one of my arms around his neck and decide I'll just let him continue for as long as he wants because I don't have anywhere to be right now. Even if I did, I'd cancel my plans in exchange for this.

Right when one of his hands slides through my hair, the water splashes beneath my feet. I squeal a little because it's unexpected. He laughs, but he doesn't stop kissing me. Now we're being soaked because my foot isn't covering the spout all the way, but neither of us cares. It just adds to the ridiculousness of this kiss. The ringtone on his phone adds even more ridiculousness to the moment because of course we'd be interrupted right now. Of course. It was way too perfect.

He pulls back and the look in his eye is somehow satiated and starving at the same time. He pulls his phone out of his pocket and looks down at it. "Did you lose your phone or is this a joke?"

I shrug because I have no idea which part of this he thinks might be a joke. Me allowing him to kiss me? Someone calling him in the middle of said kiss? He laughs a little as he presses the phone against his ear. "Hello?"

The smile leaves his expression and now he just looks confused. "Who is this?" He waits a couple of seconds and then pulls the phone away from his ear and looks down at it. Then he looks up at me. "Seriously. Is this a prank?"

I don't know if he's talking to me or the person on the phone, so I shrug again. He puts the phone to his ear and takes a step away from me. "Who is this?" he repeats. He laughs nervously and grips the back of his neck. "But...you're standing right in front of me."

I can feel the color drain from my face at that sentence. All the color in my body—in this ridiculous moment with this random guy—pools at my feet, leaving me feeling like the second-rate carbon copy of Honor Voss. My twin sister. The girl who is obviously on the other end of that phone call.

I cover my face with my hand and turn around, grabbing my shoes and my sack. I hope I can put as much distance between us as possible before he figures out that the girl he just kissed isn't Honor.

I can't believe this is happening. I just kissed my sister's boyfriend.


You can read the rest of the story when Without Merit hits bookshelves on October 3.

I want this now!

i Am reallllyyy excited for this!!!!

I am so excited! My pre-order been be on time!

I can't wait!! October seems so far away now.

Oh my gosh what did I just read! I knew it would be a bad idea for me to read that because I'd just kick myself for wanting more, but that cliffhanger! Why did I just do that to myself...

Wow! Bring on October... another excellent read from Colleen Hoover...

Can't wait to read this! You just can't go wrong with a book by Colleen Hoover!

I haven't been this excited about a book since last year. Can't wait to pick up my copy.

Omg!! This was so good. My favorite author has done it again. I'm so ready for this book lol.

Colleen Hoover books slay me every time. I can not wait to get my hands on this gem

Squeee! So good, can't wait to read the rest!

Can't wait for this book

Can't wait to read this book!

I can't wait to read this book Colleen Hoover, thanks for sharing!

Wow. I want to read now

I'm excited to read this!!

I seriously can't wait! This is going to be so good.

Colleen Hoover! Need I say more? :) It's always a big "YES" for me, super excited

Why do I torture myself with CoHo teasers?

Sounds like another can't put down read....yet again. I still have not read Too Late....I must get to that one first...but I have Without Merit on Pre-order...of course ;)

OMW this sounds like a sure hit. Super excited can't wait for the release.

Ok. So this is indeed interesting. I will wait patiently for the book to hit the shelves.

Oh My God!!!!! can this please come out right this second! This is good to be one of those amazing books, I can tell. WOW!

Wow! What a wonderful excerpt. It really sucked me in...especially the surprise at the end. I can see where this is going and I have to go along for the ride.

I cannot wait for this book!!!!

Interesting!! Can't wait to read it 🖤

The amount of need I have for this is unreal!!