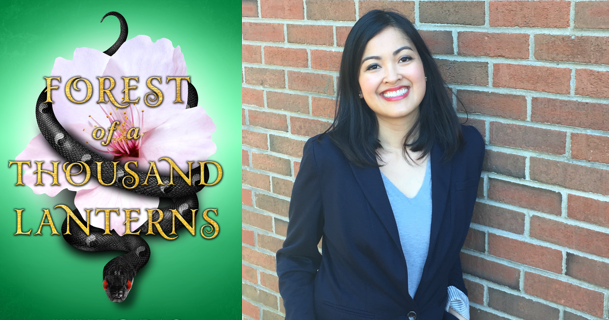 First drawn to storytelling when she was eight, devouring Nancy Drew, Anne of Green Gables, and Choose Your Own Adventure books, Julie C. Dao will publish her debut novel, Forest of a Thousand Lanterns, next month. Blending East Asian mythology with classic fairy tales, this dazzling YA fantasy features a girl grappling with her own darkness, a demanding god, and a callous magic fueled by eating the hearts of men. Dao shares an exclusive excerpt with Goodreads.


There was another room on that upper level, one of which they never spoke. It had once stored valuable tools: vats for cooking dyes, bamboo dowels for drying fabric, and boxes of needles, thread, and scissors. Guma had once made a bitter remark that her parents must be rolling in their graves now that she had turned it into a sanctuary for her unspeakable craft.

Error rating book. Refresh and try again.
Rate this book
Clear rating
1 of 5 stars2 of 5 stars3 of 5 stars4 of 5 stars5 of 5 stars
Not so very long ago, the Hou family had been tailors of rare and cunning skill with clients from across the continent of Feng Lu. Desert dwellers journeyed endless miles, bearing cobweb-thin silks to be woven into veils against the sun. Hunters brought furs down from the mountains for hoods and cloaks, telling tales of beasts the flatland folk had only heard of through legend.

Fanciful stories spread of how the Hou tailors would stitch in luck and goodwill if one paid well; underpay, and they took revenge by weaving in an impossible-to-satisfy itch, a harelip for one's firstborn, or a jealous husband. Guma's parents coyly courted these rumors, which brought in money for feasts and music lessons for their daughters, but took care to dismiss the gossip when asked directly. It would not do to own up to such abilities, not when family members had been executed for less in the past. A streak of magic had plagued the Hou blood for centuries, one that only recent generations had managed to suppress through willpower and discipline.

"Hypocrites," Guma sneered whenever she spoke of her parents, "denying the very gift that brought them their fame." Where the rest of her family had sought to curb and smother their magic, Guma embraced it with religious fervor.

Now, Xifeng followed her into the room, each of them carrying a tallow candle. It was so small, they barely fit inside together, but Guma had managed to squeeze in all she needed for her secret trade. Dried plants dangled from the ceiling, polluting the air with a venomous odor, and carvings and oddly shaped rocks covered the walls. On a crooked shelf lay a collection of rusted knives and bowls stained with vile fluids. And in the center of this dark den was a blood-spattered table, beneath which Guma had hidden her most treasured possessions.

She spread the contents of a small oak box on the table as Xifeng watched: nineteen rectangles of fine yellow wood, depicting images in burgundy-black ink. They showed emperors and empresses, crowned dragons, barren rice fields, and a monk raising a skull above his head. Xifeng could not read them herself, but she knew they concealed depths of meaning, each layer of truth peeling back to reveal an even more convoluted answer. And the messages shifted again when combined with other cards.

As she studied the images, her aunt limped around the room, lighting more candles and a large pot of incense. With the door closed, the poison-sweet fumes wrapped curls of thick, heady fragrance around her. Xifeng hated the smell, which made her light-headed and prone to strange dreams while awake, but Guma insisted on the incense for every reading. Whether it was because she enjoyed Xifeng's discomfort or needed the scent for her art, she never made clear.

The foreign deck of cards had come to Guma many years ago. Since then, she had given up the traditional wooden sticks preferred by most seers, favoring blood truth. She had taught Xifeng that the spirits of magic were reluctant to release answers without a blood sacrifice first.

Guma shuffled the cards and turned them facedown, reaching for a knife. Seizing Xifeng's left hand, she flipped the palm upward and sliced the base of her index finger. Xifeng did not flinch when the blade bit into her flesh, knowing how Guma detested weakness. The incense seemed to help, blurring the pain as a line of blood spilled randomly across several cards.

Guma turned the bloodied rectangles over with a smile. These were the same six images the spirits selected for Xifeng whenever the cards drank her blood. And drink they did, for the droplets had already begun sinking into their grain.

"I told you," her aunt gloated, tapping the first card, which showed a withered field. Beside it, the second card depicted a steed with a sword embedded in its heart. "The barren rice field means hopelessness, unless paired with the horse as it is here. When the spirit is gone, the body nourishes the empty earth. You are resourceful. You will find a way around hopelessness, and create something out of nothing."

More familiar words. More promises of talent, of a greatness Xifeng longed for desperately but could not find inside her, no matter how hard she looked.

She worried her lip between her teeth, bending over the horse card to hide her doubt from Guma. The point at which the blade entered the steed's body seemed to gleam. She imagined its heart bursting upon impact, the lifeblood spilling from its body, and felt the urge to lower her lips and drink before it was wasted.

Lifeblood, the essence of the heart, contained the most powerful magic in the world. Guma had taught her to revere the heart, for even that of an animal was enough to perform complex spells. Depending on the skill of the wielder, one could summon and communicate with others who knew this forbidden magic, or even cast a glamour over oneself to compel and attract.

Xifeng moved on to the next two cards. One showed a lotus opening beneath the moon, and the other displayed a man with a dagger in his back, shreds of flesh clinging to the blade.

"Fate finds you alluring," Guma said, tapping the lotus, "but do not be fooled. It is you who are its slave. Let no one stand in your way. If they face you, your beauty will entrap them. If they turn away, you will stab them in the back."

A scowl creased Guma's face when she saw the fifth card. On it, a handsome warrior rode into battle with a bloodstained chrysanthemum, a keepsake from his lady. The slope of his shoulders was like Wei's, and Guma pushed the image away without comment. This card was the reason she didn't punish Xifeng more severely for seeing Wei, for it foretold that he would play some important role in Xifeng's life, whether her aunt liked it or not. The bamboo cane stung but did not stop them from meeting in secret, and Guma knew it.

The word seemed to echo in the darkness as Xifeng studied the warrior's bloody flower. That was the meaning of this card, Guma had explained once. A relinquishing of something—or someone—dear, as payment for greatness. Xifeng tore her eyes from it, unwilling to think just now about what or whom she might have to lose.

And there it was again: the sixth card, showing the back of a woman's head, uncrowned, the dark spill of her hair like a stain.

Guma watched her through narrow eyes as she took in her future. This card reigned above all others; this sliver of wood showed Xifeng's true destiny. This was the greatness for which she would have to pay.


You can read the rest of the story when Forest of a Thousand Lanterns hits bookshelves on October 10.

So ready to add this to my bookshelf!

I can't wait until it comes out!

Well done and you have interesting character names. Never heard of them before reading your chapter today.

Love the cover image! My son and I will both enjoy this one.

I'm so excited for this to come out!

Can't wait to read this!!

I would love to read this East Asian Fantasy. The title is beautiful. October is not that far away.

Any chance of doing a blog post about "Ewan Pendle and the White Wraith"? :D