Gender: are you sure you know?

When I worked in an all-girls school a colleague suggested the 6th formers approach me for their psychometric gender test. ‘I think you may find the results surprising,’ she said. Sure enough, I came out more feminine than any of the female teachers in the school. It didn’t surprise me because I’ve lived inside myself all my life. I’ve also never believed in the absolute nature of any categories, including those of gender. Whilst many people born male may not identify with my degree of femininity, no-one is 100% male or female. I want to explain why that’s true for all of you too, and to ask you why it’s so threatening?

Several catalysts have brought this debate to the fore again.

One is, of course, The Danish Girl starring Eddie Redmayne which appears in cinemas today. I’m very much looking forward to seeing it soon. Eddie’s a wonderful actor and whilst some in the trans community might have wanted a trans actor, that plays into the very stereotyping we should be avoiding.

Another catalyst in 2015 was several cases in the UK of transgender convicted criminals being placed in the wrong gender prisons. Campaigns for the likes of Tara Hudson have seen the Ministry of Justice promise a review of the system. This will come tragically too late for Vikki Hudson a Male-to-Female (MtF) who was found dead in the all-male Armley jail in November.

Another personal catalyst occurred on a recent research trip to Malaysia and Thailand when, amongst other things, this picture drew responses along the lines of ‘what a pretty girl.’ 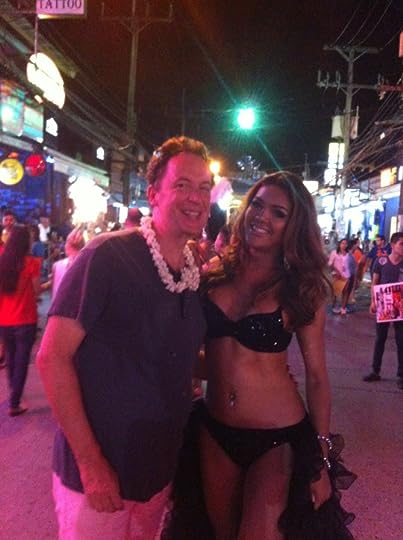 She is indeed, by all objective criteria, a stunningly pretty girl. She is also a pre-op kathoey (ladyboy). According to Thailand’s laws she is therefore neither male nor female but a separate transgender category (all praise to Thailand!). Contrary to misconceptions, many kathoey are not forced into their gender identity but they know, as do many of us in the west, from a very young age that they are intrinsically female. Many have to battle their families, though in Thailand there is plenty of encouragement and mechanisms in place for them to begin the transition. Having talked with lots of them they knew when they were little that they wanted to transition. So they took hormones whilst young and developed further feminine characteristics. Often they continue to retain male genitalia, though in some cases this is for lack of funds to have full SRS (surgery).

All societies like to create categories. They do it to bring order, as well as more crudely for financial gain. And they do it to control. Anyone who steps outside the boundaries is often considered rebellious and threatening. Mavericks are hard to control and, as societies also create scapegoats (so Rene Girard), they tend to be persecuted. The response in the The Caribbean to Marlon James’s Man Booker win has been typical of how many societies struggle with anything that is ‘queer.’ Fortunately, transgender identity is no longer considered so maverick, but that doesn’t mean we are anywhere near a fluid state of existence.

The recent beard craze primarily amongst thirty- and forty-year old men, presumably displaying them as ‘real’ men, seems retrogressive and largely driven by the fashion industry seeking to impose new styles and products. It also appears indicative of a crisis in male gender identity, perhaps borne out of fear. As a result, metrosexual advances during the naughties are in danger of being swamped by those who now look more like, well, Swampy. Perhaps there’s nothing wrong with ‘beards,’ but as symbols of being a ‘real man’ have we really become that shallow? It plays into all the wrong binary stereotyping from which we had shaken free.

Why is this retrogressive? Pre-modern societies needed to survive at all costs. By and large anything that threatened survival was made taboo. Roll forward to the C21st and we have no issues about survival (Daesh aside). The planet is vastly over-populated and science has made it possible to procreate in ever more innovative ways, paving paths for those outside the confines of M+F marriage to do so. Gender binary mentality, including within fashion, is a retrogressive response to much progress in all forms of liberty during the past century.

So how do we define ‘Gender?’ Is it simply a question of the bits with which most people are born? Manifestly not, although you wouldn’t think so from the phobic responses routinely encountered online and in the media. When we speak of male or female parts what do we even mean? In the case of a born female is it the vagina? The uterus? The breasts? Menstruation? Is it the way she looks? The way she acts? Is it the way she thinks? Her self-identification? And what of male or females who either don’t have all those parts, or have them removed e.g. for cancer risk? This is the problem: the moment we begin to define by such reductionist means we encounter problems. To be frank, I’ve worked with women who were far more ‘masculine’ than many men and I’ve worked with men who have displayed far more so-called feminine traits than some women. Much of which makes a nonsense of Germaine Greer’s binary thinking.

Ironically it’s sometimes those who transition who can be the most absolute in their gender categorisations. I’ve experienced MtF’s describe those who don’t go through with full gender reassignment as ‘traitors.’ This undoes the whole fluidity of gender with which they have been cast. But it’s ever thus with those who convert to anything. They can be the most absolutist fanatics.

Gender is complex. It is certainly more complex that the simplistic M or F designations and it’s about time the West bucked its ideas up about this. I would like to see Britain lead the way in adopting a T (trans) category, so that those who identify somewhere between M (male) and F (female) can be recognised as such.

Alternatively, let’s just do away with all gender categories. Why do we need them anyway? Why does it matter? We all have male and female characteristics in myriad shades of the spectrum, so if I want to step out in makeup and heels one day, or even every day, so what?