I'm excited to have as my guest blogger this week, long time friend and fellow author Dr. Wesley Britton.  I met Wes when we were doing graduate work at the University of North Texas, and I won't say how long ago that was, but I'm thoroughly enjoying his book The Blind Alien, so check it out!  Here's Wes to tell you more about himself, and the book!

Hi fellow readers, I'm Dr. Wesley Britton. Today, I'm delighted to share news that BearManor Media has just published my novel, The Blind Alien: The Beta-earth Chronicles, Book One. We're calling it science fiction, although I'm not sure that's the best term to describe the book.
The story begins when Dr. Malcolm Renbourn walks into a bank where he's suddenly captured by a device that drags him to an alternate earth. Blinded in the capture, Malcolm endures months of torturous experiments and has no idea what is happening to him. He doesn't understand the language he's hearing.   Not surprisingly, he's a haunted, frightened man. 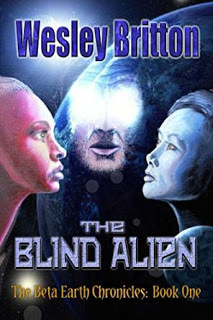 Ultimately, Malcolm begins to learn about his new planet.  At first, he's considered state property in a country that enslaves all light-skins, including the only alien from Alpha earth. Escaping into a neighboring free country, Malcolm learns even more, especially about the curse of the ancient Plague-With-No-Name that kills three out of four male babies their first year. Thus, polygamy is the norm and the basis for Beta-earth's tribal structure. Because of this, Beta's scientists want to imprison Malcolm and his offspring hoping Alpha genes might carry the cure to a curse that defines their world.
I admit being very proud of the characters you'll meet in The Blind Alien.  As the story progresses, Tribe Renbourn forms around five very strong women with very distinct backgrounds, personalities, and abilities. Bar, Lorei, Elsbeth, Joline and Alnenia are exiles and outcasts who never expected to be mothers of a generation always under the hopeful eyes of a desperate planet.
Yes, there's fantasy. Lorei Renbourn, in particular, is a prophetess of the goddess Olos and Olos is constantly reminding the tribe they have been brought together for a cosmic mission.
You can find more about the series at my website:
www.drwesleybritton.com
Book reviewers can contact the publisher, Ben Ohmart, directly at benohmart@gmail.com
You can order the e-book directly from BearManor Media at:
http://www.bearmanormedia.com/the-blind-alien-the-beta-earth-chronicles-book-one-by-dr-wesley-britton
Or through Amazon:http://www.amazon.com/dp/B015BX2CII
Dr. Wesley Britton is the author of four non-fiction books, Spy Television (2003), Beyond Bond: Spies in Fiction and Film (2005), Onscreen andUndercover: The Ultimate Book of Movie Espionage (2006), and The Encyclopedia of TV Spies (2009). For sites like BlogCritics.org and BookPleasures.com, Britton has written over 500 music, book, an moviereviews.   For seven years, he was co-host of online radio's Dave WhitePresents for which he contributed celebrity interviews with musicians, authors, actors, and entertainment insiders.
Britton earned his doctorate in American Literature at the University of North Texas in 1990. He currently teaches English at Harrisburg Area Community College. He serves on the Board of Directors for Vision Resources of Central Pennsylvania. He lives with his one and only wife, Betty, in Harrisburg, PA.
Contact Wes Britton at:spywise@verizon.net
View more on Sandi Brackeen's website »
Like  •  0 comments  •  flag