This is the third stop on my blog tour. I’m already having such fun, as I always do on these tours, talking about various aspects of writing in general, and Ray of Sunlight in particular and getting to know all of you. Thanks so much for following the tour. If this is your first stop, feel free to go back and comment on the other two, listed below, to be entered to win one of five prizes. More about that later.

Thanks so much for having me on your blog today, Susan. I haven’t been here before. Gorgeous place you’ve got here.

Russ is like a lot of my students. I work at a private special education school for kids with severe behavior problems. Most of them have attitude problems as well. Many of them, like Russ, feel the world owes them whatever they want, and when they don’t get it, the world is out to get them. They don’t take responsibility for their own actions and any time something bad happens, it’s always someone else’s fault. Our in-house therapist calls them ‘Teflon children’. Nothing sticks to them. Or at least it shouldn’t, as far as they’re concerned. Most of my students have been in and out of juvenile detention, just like Russ, and many of them feel they were punished unjustly. They’ll admit to doing whatever they did to get ‘sent away’. They just have so many rationalizations about it that they think the judge ‘should have understood’.

Don’t get me wrong. I love my students. Each and every one of them. Even when they’re acting like Russ does at various times throughout the story. Even when they won’t own up to their responsibility. Even when their answer to a simple question is “eat shit”. Even when they hate everyone and everything, including me, I always love them. And I don’t feel that I’ve written a negative caricature of them in Russ.

For, you see, one of the big reasons I stay in this very challenging field is because I often see in my students, the changes I describe in Russ. They find something to turn themselves around for; be that some interest, some organization, some activity or some person. It doesn’t happen all the time, and it doesn’t happen as often as I’d like, but it does happen.

I had one student who was so out of control when he first came to us that he broke the window out of my classroom. He’s now back at public school making straight A’s. He’s discovered a love of drafting, and he’s good at it. He knows he has to have a college degree for what he wants to do and he’s now willing to do what it takes to get there.

I had another student who was so irresponsible when he first came to our school that at seventeen he couldn’t be relied upon to get his little sister breakfast before coming to school. He couldn’t get himself up for school, even with an alarm. He wouldn’t do any work at school, but it was our fault when he failed. Then his girlfriend got pregnant and he instantly changed. He’s now a stay at home dad with a healthy, well cared for two year old. It’s not necessarily the impetus I would have wished for him, and he’s so bright I’d have loved to see him go to college, but the point is he’s now responsible and happy and willing to make sacrifices for someone else.

Russ finds his motivation in CJ. It’s not an instantaneous change across all areas of his life, but he does change. By the end of the book, he’s much more concerned with what CJ needs than what he does. It’s a total turn around, and while it’s not quite as rewarding to write about it as to see it in my real life students, it sort of feels like I’m sharing my students’ success stories with the readers in a way, so that’s rewarding in itself.

What about all of you? Do you know any young people, or even any older ones, like Russ? Anyone who feels the world owes them a living? Anyone angry and bitter at the world? Anyone who used to be that way but found a reason to turn their life around? Comment below for a chance to win.

Here’s how the giveaway will work. Visit as many sites as you want, as often as you want. Each comment will enter you to win one of the following prizes: 1st) An autographed paperback copy of Ray of Sunlight, 2nd) An electronic copy of Ray of Sunlight, 3rd) Your choice of audio or electronic copy of Living Again, 4th) An electronic copy of Through the Years, and 5th) an electronic copy of Haunted. The takeovers for Harmony Ink’s blog and Facebook page will be part of the tour, so comments on there will count. I will draw the winners during the FB takeover and will announce them then, but will come back and announce it to all the sites too. So, you don’t have to leave your email address here if you don’t want to, just remember to check back. You’re also welcome to leave your email in the comments if you’d rather or email me at brynnstein2@gmail.com with the subject heading of “just in case”, so I can contact you if you win, if you don’t want to have to stop back by the blog sites. You don’t have to be present at the FB takeover to win. 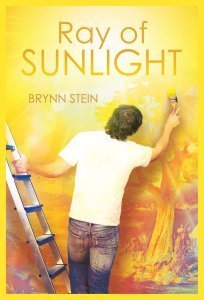 Russ Michaels has his whole life ahead of him but no plans beyond dropping out of school as soon as he turns eighteen. He’s been in and out of juvenile detention for the last four years and thoroughly expects to end up in an adult penitentiary at some point. He hates life and everyone in it, especially this latest community service that he earned in lieu of juvie yet again.

CJ Calhoun has big plans. He wants to bring joy and happiness to sick and injured children for as long as he can by performing as a clown. The problem is, he has stage-four cancer and a horrible prognosis.

When circumstances throw these two polar opposites together, they find they have more in common than they imagined. CJ discovers Russ’s talent for art and arranges for Russ to create a mural in the hospital foyer, which leads to a tentative scholarship to the Art Institute. As life changes in ways neither of them could have expected, Russ must work harder than ever to better himself as CJ struggles with his deteriorating health.

Purchase Ray of Sunlight at the following links! 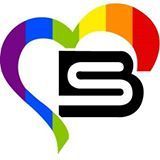 Brynn Stein has always loved to write. Fan fiction, original fiction, whatever. While Brynn wrote in numerous genres—everything from mystery, to contemporary, to supernatural—she had always tended toward strong male characters. And then she discovered “slash,” male/male romance, and all those strong male characters were finally allowed to express their love for one another. It seems that there are always at least two characters clamoring to tell Brynn their story.

Brynn lives in Virginia near her two grown daughters who encourage her writing and provide a sounding board for fledgling stories. When she isn’t writing, Brynn teaches children with special needs. In free time, when such a thing exists, she reads anything she can get her hands on, and haunts bookstores. She draws and paints, and enjoys the outdoors—especially if she can get to the beach—and is always thinking about her next story.

Please feel free to contact Brynn at any of the following:

Thanks so much for having me over, Susan.

Thank you for the insight into Russ and for the post. I love the cover of this book.
jczlapin(at)gmail(dot)com

Thanks Jen. Paul Richmond did the cover. He did the cover of Haunted also. He's extremely talented and very easy to work with.

Brynn wrote: "Thanks so much for having me over, Susan."

Thank you for stopping by, Brynn :)

I really like the blurb and excerpt. Cover is indeed beautiful it goes very well with the title.
Thanks for the giveaway.

Thanks for commenting Dutchgirl.

Thank you for sharing the inspiration behind Russ!

Thanks for commenting HB. I entered your name, along with all of the above people, into the drawing.

Thank you for sharing your teaching experiences and how that assisted with creating your character Russ.

I had a similiar teaching experience whilst training and felt that a lot of them put on an act of bravado and bad attitude to cover up insecurity and fear of rejection.

Interesting. I give you a lot of credit. I tutored one summer and I think it was one of the hardest jobs I ever had. Thanks for sharing with us

Thank for the interesting post about the work that you do with troubled youth and the successes that you have had. I loved hearing about them and will you my best!

Thank you for the book and the chance at the giveaway!

And the winners of my blog tour give away are:
An autographed copy of Ray of Sunlight = Sula Holland
An Electronic copy of Ray of Sunlight = Denise Dechene
You choice of audio or electronic copy of Living Again = HB (HB, please email me at brynnstein2@gmail.com and let me know if you want the audio or electronic version)
Electronic copy of Through the Years = Ree Dee
Electronic copy of Haunted = Jen CW
Congratulations to the winners. If you left your email address, or sent it to me, I’ll be contacting you. If you haven’t, please write me at brynnstein2@gmail.com.
Thanks so much to everyone who commented on and everyone who hosted my blog tour. It was a lot of fun.