Replacing “Redskins”: An Add-&lt;i&g... A Modest Defense of “Indians”

How The Simpsons Gets Team Naming Right

Among the things they do brilliantly, the writers for one Fox TV show have a knack for observing established protocols when giving name to their fictional sports teams (or perhaps your favorite squadron from the real world). I was tempted to give them their own chapter in my otherwise way-too-serious volume, Naming Rites . Instead, I provide that content here in a structure that mirrors that of the book (keeping in mind there’s no such team as the Spungos ).
In multiple installments of The Simpsons, members of the eponymous family are fans of baseball’s Springfield Isotopes, named for the atomic power plant that employs half the town. (Think Milwaukee Brewers or Pittsburgh Steelers.) You can see isotope defined in terms of relative subatomic masses elsewhere (Glayvin!), but “nuclear physics stuff” suffices for our purposes. In a 2001 episode, our man Homer stumbles onto a secret plan to move the ’Topes to Albuquerque, New Mexico. When the real Duke City ended up with a real minor league team two years later, Simpsons fans stuffed the ballot box in a team-naming contest to make them Albuquerque Isotopes.
Other teams taking the nuclear option in Homer’s hometown are the Springfield Atoms (pro football), Springfield Meltdowns (proposed NFLers) [note 1, below], West Springfield Atomic Bombs (youth baseball), and Springfield Neutrinos (pee wee lacrosse). The Springfield Ice-O-Topes are named to recognize the many real IceCats, Ice Dawgs, and IceGators in minor league hockey. Youth hardballers are the Iso-Tots.
The nuclear-sounding Springfield Reactors of the fictional W.A.B.A. (women’s hoop) face the Shelbyville Meerkats. A meerkat is a small cousin of the mongoose that isn’t really a threat to anybody. I pointed out in Naming Rites that teams named after small, generally non-predatory animals are almost exclusively found in women’s leagues and at women’s colleges. Think of the Mary Baldwin College Squirrels, Columbia College Koalas, or University of Alberta Pandas. I’m not saying that’s OK; I’m saying that’s how things roll. (After selling the Reactors to Ogdenville, Mr. Burns buys into the Springfield Pachyderms of elephant polo, a real sport in Nepal and Thailand.)
In a 2008 episode, a Keith Jackson-y voice welcomes viewers to the “one-hundred-and-seventeenth dust-up between the Snortin’ Swine of Springfield A&M and the Springfield University Nittany Tide.” If I need to tell you what’s funny about “Nittany Tide,” perhaps I’m not the blogger for you, but that the Swine are up to their bellies in history may require explanation. Springfield’s A&M is known as a “cow college” because its founder was an actual cow [note 2], but the writers seem to know that “cow college” was a real insult that male students at private liberal arts colleges once hurled at the attendees of nearby state-funded agricultural and mechanical colleges. “The animosity, moreover, was mutual. The scientists mostly regarded the traditional liberal arts curriculum as uninteresting, impractical, undemanding, and effete” [note 3]. Lady Techsters at Louisiana Tech, Aggies at Texas A&M and New Mexico State, and Rams at Albany State, Colorado State, Farmingdale State, and Rhode Island all reveal their sponsoring institutions’ roots as state-funded A&Ms.
I make the point in my book that team nicknames and mascots aren’t the same thing. Hoyas aren’t bulldogs; Tar Heels aren’t rams. Nor are Athletics elephants nor Phillies phanatics. Such distinctions in the Simpsons world are apparently lost on pro football’s San Antonio Cow Skulls, who favor a cool emblem over a sensical nickname.
To avoid combat service during World War II, a disguised Grandpa Simpson roamed the outfield for the Springfield Floozies, a name that’s only slightly less respectful than the Racine Belles, Rockford Peaches, Milwaukee Chicks, Muskegon Lassies, and Chicago Colleens of the All-American Girls Professional Baseball League. That real League of Their Own even fielded sissy-sounding Sallies from an actual Springfield in Illinois [note 4]. 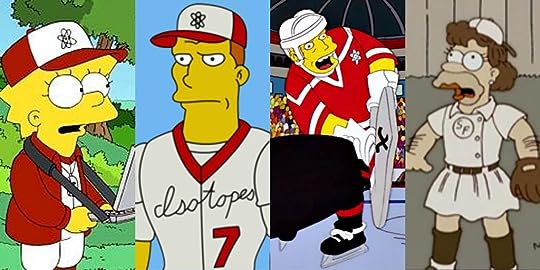 Left to right: Lisa overthinks as Isotots manager; Buck Mitchell slugs for the Isotopes; Kozlov brings fire to the Ice-O-Topes; Grandpa plays the field, as Floozies tend to do.

Teams in the same bowling league as Homer’s Pin Pals (a pun for “pen pals”; hey—we said we’d explain ’em) include the foxy ladies on the Home Wreckers , the Christians on the Holy Rollers , second-tier TV talent on the Channel 6 Wastelanders, presumably crooked Police Framers, the auto registry’s DMV Kings, and the Stereotypes, a collection of stock characters that represent the writers’ plea of guilty to the charge of sustaining unflattering generalizations.
Athletic -Hogs and -Dogs (or Dawgz) are starting to appear everywhere, often because animals don’t have lobbying groups to protest to co-option of their identity. The Simpsons’ Utica Mohogs recall minor-league Mohawks from New York’s Mohawk River region in several sports. Their upstate rink is the Kill-Kwik Rat Poison Arena, and anyone who’s been in that part of New York recognizes that every bridge seems to cross “Kill” Somethingorother … as kill is the Dutch word for a stream. (We wonder if the Simpsons writer who invented the Mohogs knew that the border-bound USHL Kansas City Mohawks [1949–51] got their name by adding their state abbreviation—Mo.—to the back half of Kansas’s “Jayhawks.”)
Lisa watches a TV documentary about a soccer riot between fans of Manchester United and Sussexton-Hamptonshire-Unleath, the latter being only slightly more syllabically ambitious than real English villages like Frisby-on-the-Wreake, Hinton-in-the-Hedges, or Newcastle-under-Lyme.
In a poker game, Monty Burns ends up winning the Austin (not Boston) Celtics from the Rich Texan. Burns renames them the Springfield Excitement, which mocks modern team names that are barren in historical or geographical relevance and short on pluralism. (We’re looking at you MLS Montreal Impact and WNBA Atlanta Dream [note 5].) We’d repeat that point for the show's Springfield Stun (arena football) or Milwaukee Zoom (professional LAX), either of which has the same monosyllabic punch and want for meaning as the real AFL’s Spokane Shock or AHL's Syracuse Crunch.
Even an inanimate carbon rod can figure out why Capital City’s baseballers are the Capitals, but they’re no less redundant than real baseballers like the St. Paul Saints (independent) or the Los Angeles Angels (National League), a name that translates to “The-The Angels-Angels.” The Capitals are the big league club that drafts Homer to back up the Capital City Goofball (an homage to the Phillie Phanatic) after he (Homer) is seen dancing on the Isotopes’ Jumbo-Vision screen.
Teams in Simpsonia that fail to have informed monikers still seem purposeful. The Springfield Wildcats played their first pee-wee football game against the Ogdenville Wildcats, prompting Bart to say, “I hate those Wildcats so much.” That can be compared directly to the nomenclatural futility of having the (real) Arizona Wildcats face the (real) Kentucky Wildcats for the 1997 men’s NCAA hoop crown. Or the CFL Grey Cup final, which set the Saskatchewan Roughriders against the (late) Ottawa Rough Riders four times. Or the 2013 SEC title game between gridiron Tigers from both Auburn and Missouri. The question asked by Wildcats in both Springfield and Odgenville is … Are any of us really embiggened by nicknames that don’t effect distinction from the opposition? (Worth noting: Springfield’s Wildcats were—perhaps unsurprisingly—shut out by the side from Victory City, 34–0.)
Accepting its role as Springfield’s civic foil, the next town over hosts hockey’s Shelbyville Visitors and baseball’s Shelbyville Shelbyvillians. Football’s Shelbyville Sharks observe alliteration, as do many college and pro teams.
We’ll take the 2014 Simpsons-Futurama crossover episode (Simpsorama) as an excuse to point out that one team in Futurama’s blernsball league is called the Mars Greenskins. Chinese colonists on Mars have been raising buggalo only to see those herds rustled by Native Martians of a sage-ish complexion. Fans of Redskins teams may find in that what relevance they will.
People who split their time between watching cartoons and playing fantasy sports have provided multiple instances each of roto-league Springfield Isotopes (examples here and here) and Shelbyville Sharks (here and here) [note 6].
The Simpsons even holds real teams to the metaphorical identities that they’ve assumed. When sensitive new-age professor Stefane August finally tries to sit and take in a football game, he observes, “The Patriots are deep in Redskin territory .... This isn’t entertainment; it’s genocide!”

NOTES:
1. The Atoms’ cheerleaders are Atomettes, exposing the necessity of an index entry in my book that reads “team names: -ette suffix in.”
In 2006, Springfield beat out the Los Angeles bid to get the Meltdowns. That alludes to another argument … that the NFL has kept L.A. empty since 1994 as a way of strong-arming smaller media markets into making huge concessions to keep their team.
The Meltdowns were slated to play at Duff Beer Krusty Burger Buzz Cola Costington’s Department Store Kwik-E-Mart Stupid Flanders Park, which mocks the absurdity of stadium-naming rights (as did Springfield’s Gee Your Hair Smells Terrific Arena, Buzz Cola Dome, Yahoo Search Engine Arena, and—the favorite of the Naming Rites blog—an arena where the marquee reads “Naming Rights Available”).
2. In another “cow college” joke, Miss Hoover’s class watches a TV documentary in which cattle are led to the slaughterhouse … or sent to “graduate from Bovine University.” An ever-hopeful Ralph Wiggum is inspired: “When I grow up, I’m going to Bovine University.”
3. Christopher Jencks and David Riesman, The Academic Revolution (New York: Doubleday, 1968): 224.
4. Man, did I get mail. While I maintain that it was less than charitable for the men who ran the AAGPBL to give women athletes ultra-feminized monikers and uniforms featuring short-shorts, it is nothing but commendable that (appropriately attired) women’s and girls’ teams now repeat AAGPBL nicknames out of respect for their athletic heroes.
5. We will doubtless incur the wrath of Georgians who believe that the 1963 “I Have a Dream” speech by Atlanta native Martin Luther King, Jr. is way more than enough historical justification for the name of the 2007-founded Dream, but we can find no written instance of the WNBA nickname being tied to MLK’s speech until well after their inaugural 2008 season. I would have used the tie-in to MLK in a heartbeat in my book if it wasn’t a retrofitted backstory.
6. Here are exhaustive lists of Simpsons and Futurama team names:
•Simpsons: http://simpsonswiki.com/wiki/Category...
•Futurama (blernsball teams): http://theinfosphere.org/images/cache...

© Glenn Arthur Pierce, 2015. Unauthorized use and/or duplication of this material without express and written permission from this site’s author and/or owner is strictly prohibited. Excerpts and links may be used, provided that full and clear credit is given to Glenn Arthur Pierce and the book Naming Rites with appropriate and specific direction to the original content.