So business cards... Moo vs. Vistaprint Do you buy books that are different o...

When good authors go to the dark side

Subtitled: How I got banned from a Facebook fan page.

Most of you probably don't care, and haven't seen the increasingly bizarre antics of author Anne Rice.

Please keep in mind, this was an author I was a HUGE fan of. I own every one of the Vampire Chronicles. Every one of the Mayfair Witches books. Most of which were bought -- at retail -- in hardcover.

I was a diehard fan.

Then came the weirdness with freaking out on people for writing fan fiction, which is odd and off-putting. Then came the actual bible fanfic she wrote, in which she retold stories of the bible with fill-in-the-blanks weirdness.

That was the point at which I quit buying her books and hoped she'd eventually return to being the great author who wrote Interview with the Vampire.

Instead, what we now have is an internationally best-selling author, with nearly 100 million copies of her books in print (Yes, you read that right... 100 million), who has turned herself into a literary equivalent of a member of 4chan's /b/ forums.

In the past several months, Ms. Rice has aligned herself with a group calling themselves "Stop the Goodreads Bullies." I've run into this group before when dealing with some reviewers on Goodreads I feel don't act in any sort of polite-in-public manner. And I'm not above an Internet flame war... god knows I've been in my fair share of them.

But what STGRB does is reprehensible. They pick on reviewers they feel are "bullies" and that could range anywhere from a snarky 1-star review to adding a book to a shelf because you don't like the author.

Personally, I don't need shelves. I know which authors I don't want to give money to, and don't need a shelf to remind me.

At any rate, at various points, these individuals -- who post anonymously, I might add -- have researched and revealed personal information of reviewers and bloggers they don't agree with. This includes addresses, locations from social media location tracking, etc.

In other words, violating the privacy of these individuals, as well as their children and families.

This isn't news to anyone in the industry... writers such as Foz Meadows have been talking about this hot mess for two years. But when you are an author with 100 million copies of your books in print, you bring a lot of attention to people who shouldn't be lauded in the first place, much less on an international stage.

In this week's festivities, Ms. Rice highlighted a STGRB post in which a reviewer one-starred a whole mess of books by an author.

Here's another hint: people do this all the time. It's called TROLLING. (Link to Urban Dictionary definition) I have an author who's still angry about a book I one-starred and gets her fans and/or friends to 1-star my book. Because she's angry about a review I wrote two years ago. She actually did it herself at first until I noted it and laughed.

See, I find this sort of thing funny. It's the equivalent of elementary-school shenanigans, and it comes part and parcel of being online.

Apparently, however, Ms. Rice is either new to the Internet or can't grok that in light of 100 million books in print (and hundreds of thousands of reviews... on Goodreads, Interview with the Vampire has over 294,000 ratings, and over 5,000 text reviews), even 100 people one-starring all her books means NOTHING.

To her, apparently, this means everything. To the point where today she called out "Gangster Thug Careerist Reviewers."

I posted to Ms. Rice's Facebook page. I don't like being called names (and that's not even getting into the racist connotations of the word "thug" which has been hotly discussed online). Ms. Rice, however, is NOT WRONG. EVER. And if you claim that she is, even when you give proof of your statements, you are accused of libel. Told you are rude. And banned from her fan page.

I'll let the screenshots below speak for themselves, but I can tell you this: my children, who have never been banned from reading a book in their short lives, will not be reading Anne Rice. And after seeing the screenshots, my teen, who is the same age I was when I discovered Interview, said they'd never read one of her books, even for class.

The definition of bully, from Merriam-Webster: a blustering browbeating person; especially :  one habitually cruel to others who are weaker.

Who's the weaker, and who's the stronger in this case? Ms. Rice? Or the readers she's helping STGRB go after?

(Note: the entire thread was deleted by Rice. This ain't my first rodeo, so I screencapped as I typed.) 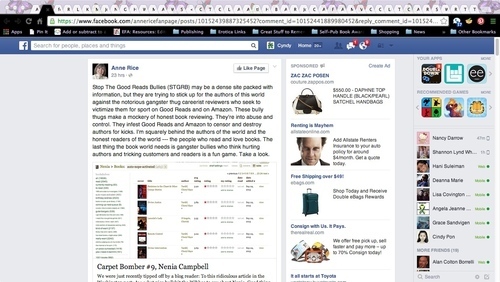 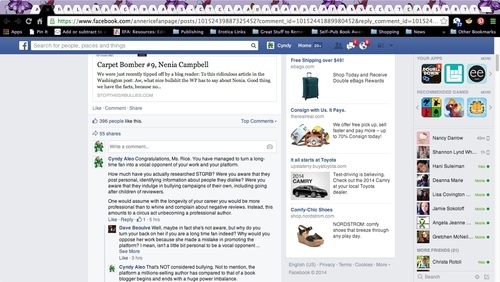 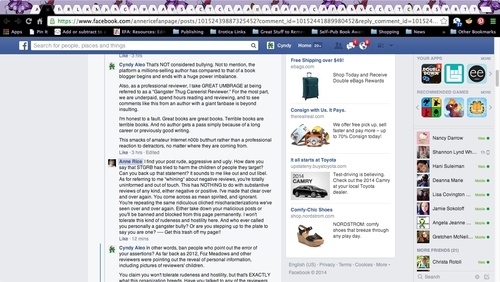 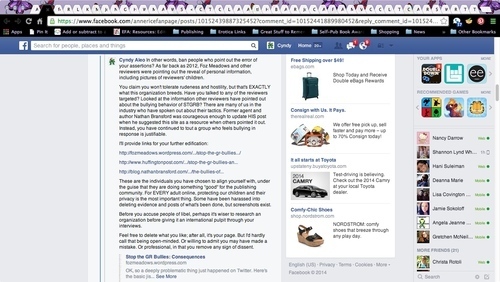 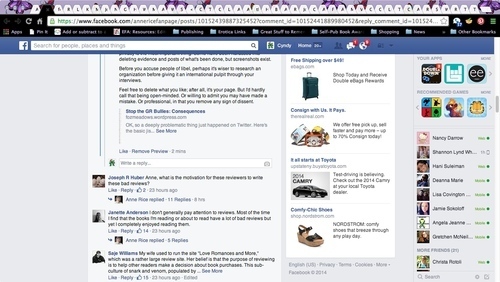 I loved your article, so spot on. I did a post similar, although I did not catch any of your comments. She was deleting comments left and right, anyone who disagreed with her! I just wish I could see your screen shot clearly, they are too small to read. :-(

Is there any chance there's a close up of the screen caps? I'm finding it really hard to read them.

Shelby *wants some flying monkeys* wrote: "You just won my heart with this post <3"

Is there any chance there's a close up of the screen caps? I'm finding it really hard to read them."

If you click through to my actual blog post, I'm pretty sure they are embiggened. Let me know if they aren't.

Thank you! Where is everyone finding this post? My email is full of notifications!

Thank you! Where is everyone finding this post? My email is full of notifications!"

from one of my friends liking it.. Shelby, I think. I won't be buying any future books of hers now, disgusted by miss rice's behavior and the other ones who think this is acceptable behavior

This post got a shoutout on BookLikes; that's how I found it.

Terri R. wrote: "from one of my friends liking it.. Shelby, I think. I won't be buying any future books of hers now, disgusted by miss rice's behavior and the other ones who think this is acceptable behavior "

It breaks my heart, because I really think she may have lost the plot, both personally and professionally. I miss the excellence of her books.

Susanna - Censored by GoodReads wrote: "This post got a shoutout on BookLikes; that's how I found it."

Thank you! I was at RT Booklovers Con last week and wasn't able to get online with anything but my phone, so I was like "Why has my email blown up on this post?"

Cyndy wrote: It breaks my heart, because I really think she may have lost the plot, both personally and professionally. I miss the excellence of her books. "

me too, makes me wonder how she got in this mind-set... its also saddens me that so many of her fanbase agree with her, I love/loved her too but i'm done with her now... I'll probly keep the earlier books I have of hers, undecided still.

Mine too, but I am not convinced her fans support her support of STGRB, per se. I think they believe they are supporting an anti-cyberbullying site, which we know they are not. I have chatted with a few of her fans, and read posts by others, who (like you) were also banned from pointing out the obvious to her. You will not see an anti-STGRB post on her FB page, but you won't see many "We love STGRB!" posts either.

How was RT in NOLA? I followed so many of the Tweets, looked like a blast! So many posts coming from the bar areas, made me laugh ;-)

BTW, I posted a blog with a link to this article over on BL, which I found it from another article also posted in this blog. http://karlynp.booklikes.com/post/885...

I found this link in some posts on recent drama.

Not doing drama marketing for involved parties by naming names or re-drumming up the ongoing drama but there's a real doozy of a supporter for Rice and the STgRB grubs calling Authors and reviewers bullies for saying a book was definitely not about rape but rather the love between a female slave and her owner—as proved by the historical fact "...they had six children together."

Yup, anyone saying sex act could be considered non-consensual because slaves were not free is a bully because the act resulted in pregnancies.

(certainly neither Ms. Rice nor anyone other than person posting can be held completely responsible for someone else's words but both she and grubs are lauding the fellow and crying "bully" on differing opinions.)

Hi, I also found this link from a booklikes post, http://goo.gl/nsr5A2
Last year, I was also banned by AR, on that very same thread. Funnily, I discovered a couple of days ago that I was no longer banned. I am assuming that AR bans so many users that she reaches her limit and then has to unblock some of us. LOL.

This time they have gone after Jenny Trout - they have managed to cancel the release of a box set that was due for publication today as it contained one of her novellas (more info on her blog).

The whole thing is beyond belief. I just don't understand why the people close to this once beloved author do not do something to contain her - she is fast loosing all of the respect she once held.

Excellent post! You have another fan in me. Thanks!!!