If at first you don’t succeed… Made in Hollywood: The ROUGH CUT book... 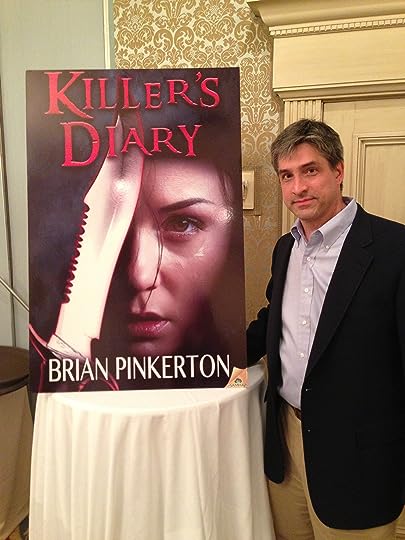 My new romantic suspense novel, Killer's Diary, made its paperback debut this summer at the World Horror Convention in New Orleans. In this photo, you can see me standing next to a promo poster of the book cover like a proud papa.

When the book was originally conceived, I had an agent who felt the book would sell more copies and land a bigger deal if I used a female pseudonym since the main character was a woman and more women buy books than men. I actually wrote the manuscript with that likelihood lurking in the back of my mind. Eventually I changed agents and the new agent shopped the manuscript under my real name. Hell, I spent a year of my life writing that book, I wasn’t exactly eager to surrender credit to a fake person. Killer's Diary entered the marketplace as a novel by Brian Pinkerton, for better or worse.

When the opportunity arose to share this story, I got to thinking...how do readers feel about pen names? Does it matter if the author’s name is fake or even misleading? I have known many writers who use pseudonyms for various reasons, most of them marketing related (including a shift in genres or rebooting a career under a new “brand”). Some authors replace their first and middle names with initials to obscure the gender, under the perception that readers won’t buy books from authors of the opposite sex. Really?

Here’s a funny addendum. After Killer's Diary came out, a reader approached me and said, “Brian Pinkerton? Like in Pinkerton Detective Agency? Wow, that’s a great name for a mystery writer. It’s gotta be a pseudonym, right?”