K-class Submarines, and the Battle of May Island 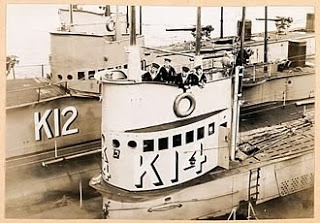 The K-class of submarine, designed in 1913, and ordered by the Royal Navy in 1915, has such a tragic history, that readers may wonder how the crews had the courage to go on board one, never mind go to sea. They soon had the nickname of Kalamity-class vessels.
The submarines were steam driven, and had two funnels to emit the smoke of their coal furnaces. When diving, the funnels were closed, a supposedly water-tight seal.
They were over 300 feet long (the length of a football field), but could only dive to a depth of 200 feet.
Plagued by problems from the outset, only one K-class actually engaged the enemy; ramming a U-boat when its torpedo tube jammed.
Here are some details of their chequered history (in number order);
HMS K1; In 1917 K1’s squadron was on patrol in the North Sea, led by the light cruiser Blonde, then submarines K1, K3, K4, and K7.
(The same formation, so tragic at the Isle of May incident)
HMS Blonde turned sharply to avoid three cruisers which crossed her bows, which caused confusion amongst the following submarines and while K1 was maneuvering, seawater poured into the boiler room through the open funnels and put the boiler fires out. The loss of steam pressure caused the submarine to slow down and although K3 just missed her, K4 struck a blow alongside K1’s conning tower which pierced the hull.
Seawater poured into the control room and reached the batteries under the floor causing a buildup of chlorine gas. The damaged submarine signaled to HMS Blonde that she was sinking and the 56 crew of the submarine were transferred to the cruiser using the cruiser's two rowboats. It was decided that K1 could not be saved and so she was sunk by gunfire from the cruiser.
HMS K2; had an inauspicious start. In January 1917, she was damaged by an explosion and fire during her first diving trials.
On 11 January 1924, K2 collided with K12 as they departed from Portland Harbour. K2 smashed a hole in the forward casing of K12 and buckled her bows for about 6 feet.
On 7 November 1924, K2 collided with H29 during exercises. 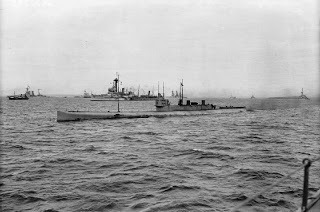 HMS K3; was the first to be built, and sailed 4th August, 1916. In December of that year, at sea with a young future King George VI (Queen Elizabeth II’s father) on board, it dived under the waves of its own accord, a dive so sharp, that its bow rammed the muddy sea floor at 150ft, and its stern raised out of the water, with its propellers above the waterline. It took the surrounding craft twenty minutes to get the craft off the sea floor, and back to the surface.
A month later, on 9th January, 1917, K3’s boiler room was flooded in the North Sea when sea water got inside the funnels (a common problem in K-class submarines).
In November 1917, K3 was involved with an incident with the 4th Light Cruiser Squadron that led to the sinking of the K1.
On 2 May 1918, K3 yet again uncontrollably dived to 266 feet which crushed part of the hull.
HMS K4; On 17 November 1917, K4 collided with sister ship K1 (story told above).
K4 ran aground on Walney Island, near Morcambe. 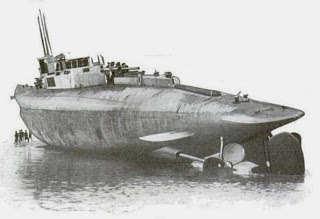 K4 sank on 31 January 1918 during the night time fleet exercises later known as the Battle of May Island (Operation E.C.1) when she was attached to the 13th Submarine Flotilla. While attempting to avoid a collision with K3, she became the victim of collisions with K6 and K7. She sunk with all hands.
HMS K5; surviving the war, K5 was lost with all hands when she sank en route to a mock battle in the Bay of Biscay.
K5 left Torbay on 19 January 1921 with the K8, K10, K15 and K22 for a mock battle in the Bay of Biscay. All 57 men aboard were lost on 20 January about 120 mi (190 km) south-west of the Scilly Isles . She had signaled that she was diving but she did not surface at the end of the exercise. After a battery cover and a sailor's "ditty box" were recovered, it was presumed that she had somehow gone past her maximum depth.
HMS K6; was the first of the K class to have its bows raised by converting it into a bulbous swan shape. In 1917, K6 refused to surface during a submerged trial in North Dockyard, Devonport.
At the Battle of May Island, she was responsible for ramming K4 and slicing her in half.
HMS K7; was involved in the accident when the K1 sank. She was also involved in the battle of May Island exercise. K7 was damaged in the exercise by running over the sinking K4.
HMS K8, K9, and K10; Amazingly they had no blemishes in their Royal Navy Career.
HMS K11; In 1917, K11 was damaged by fire during a North Sea patrol. She was forced to surface and was towed by a destroyer. K11 was part of the disastrous Battle of May Island exercise. She was forced to take avoiding action to avoid K14, but survived the exercise. 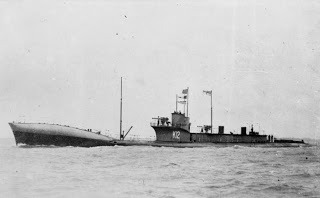 HMS K12; took part in the Battle of May island, surviving the disastrous exercise. Then in 1924, K12 collided with the aforementioned K2. K2 smashed a hole in the forward casing of K12 while K2 buckled her bows for about six feet.
HMS K13; In 1917, during sea trials in Gairloch, heavy seas damaged one of the funnels and water had nearly flooded her engine room. The damage was repaired but the next day she sank. She had 80 people on board - 53 crew, 14 employees of the shipbuilders, five sub-contractors, five Admiralty officials, a River Clyde pilot, and the captain and engineering officer from the still-completing K14. 32 crew died in the accident and 48 were rescued.
After getting the submarine to the surface, at 6 p.m. the following day, K13 tore the bollards out of the barges and sank again, flooding through the hole. The submarine was finally salvaged on 15 March, repaired and recommissioned as HMS K22.
HMS K14; was part of the Battle of May Island exercise on 31 January 1918, in which her steering jammed while avoiding a collision. She was rammed by K22 behind the forward torpedo compartment, but did not sink, and was repaired. Two men were lost.
HMS K15; sank due to an accident, when moored alongside the light cruiser Canterbury at Portsmouth Harbour on 25 June 1921. 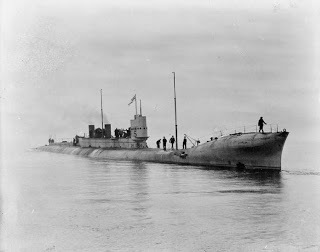 HMS K16; The only incident that occurred with K16 was a sudden dive in Gairloch after her hydroplanes failed. She surfaced successfully.
HMS K17; sunk on 31 January 1918 during the night time fleet exercises later known as the Battle of May Island (Operation E.C.1) HMS Fearless ploughed into K17 at the head of a line of submarines. She sank in about 8 minutes with the loss of all hands.

In hindsight, the K-class (Kalamity) submarines were a terrible waste of both money and men. These seventeen ships cost around six million pounds (in 1915) and claimed the lives of hundreds of brave submariners.
View more on Ian Hall's website »
1 like · Like  •  0 comments  •  flag