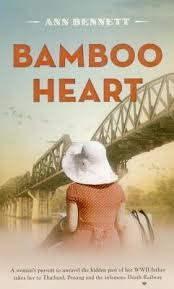 Ann Bennett has just taken over our monthly column, Indie Spotlight, which focusses on indie authors and self-publishing.

Ann published her best-selling Bamboo trilogy, Bamboo Heart, Bamboo Island, and Bamboo Road, conventionally, through Monsoon Books. All three novels are set during and after World War Two, in Burma, Malaya and Thailand.  Bamboo Heart won the inaugural Asian Books Blog Book of The Lunar Year, for the Year of the Horse.

Ann chose to self-publish her most recent novel, The Foundling’s Daughter. It concerns a mystery with its roots in British India, during the Raj.

To kick-off as our new columnist, Ann here introduces herself, and her work.
Hello, I’m Ann Bennett and I’m delighted to be the new regular contributor for Asian Books Blog.

A bit about me. I’m English. I live in Surrey and work in London, but I have a passion for Asia particularly South East Asia. I took my first trip to the region in 1985 when I was in my early twenties, travelling from Bangkok to Bali, via Singapore, by public transport and have returned many times since. My interest was first kindled because my father had been a prisoner of the Japanese in Thailand and I wanted to find out about where he’d spent the war. He’d served in the Indian Army in the 1930s on the North-West Frontier near Quetta, and had volunteered to be posted to the Malaya campaign where he was one of the 100,000 Allied soldiers captured by the Japanese at the Fall of Singapore in February 1942. As a prisoner of war he worked on the Thai-Burma railway in several camps in Thailand and ended the war in Shirikawa Camp in Taiwan. He managed to survive three and a half years of starvation, disease and brutal treatment, and the sinking of his transport ship, the Hofuku Maru, but he retained a life-long love of India, and could speak fluent Urdu. He died when I was a child, and as I grew older I became increasingly interested in finding out about what had happened to him during the war.

My research into my father’s wartime experiences gave me the idea for my first novel, Bamboo Heart. Dad’s own story, which I discovered in his Liberation Questionnaire in the National Archives in Kew, London, formed the basis of the plot. Bamboo Heart was published by Monsoon Books in 2013. It was shortlisted in the best fiction category for the Singapore Book Publishers Awards and won the Asian Books Blog’s award in the Year of the Horse. I followed it up with two further books about the second world war in South East Asia; Bamboo Island, about a rubber planter’s wife who is caught up in the Japanese invasion of Singapore, and Bamboo Road, about a member of the Thai underground whose life is ripped apart by the war. 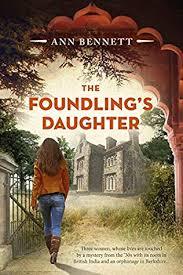 I’ve just released my fourth novel, The Foundling’s Daughter, which is partly set in British India of the 1930s. This is my first experience of self-publishing, so I am learning the ropes with a bit of help from friends who have already trodden the path.

The Foundling’s Daughter tells the story of three women connected across the decades by mysterious events that took place in an orphanage in England in the 1930s that has its roots In British India. One strand is the story of Anna Foster, told in diary form. Anna is the wife of British army officer, who lives the life of a reluctant memsahib on the British cantonment in a fictitious Indian town called Kandaipur. I started writing the Indian section of the book in the late nineties when my children were small. Back then it was entitled Shivaji’s Ladder. At that time I did a lot of research into the social history and lives of the British in India during the latter years of the Raj which I drew upon when I was writing Anna’s story for The Foundling’s Daughter.

In my next post I will describe what I found out about the lives of British ex-pats in the British Raj.