You Will Not Regret The Trip Old NE Pothead Self Portrait

Here in Disorderly Studio, on the very highest art materials storage shelf, there is a novel manuscript. On the highest shelf and it's now been there for years. About my relationship with Malcolm X.

After 5 drafts in 18 months of solid work, I hid it there. Spring had come up in this window in our new house in the woods twice.

Apparently my relationship with Malcolm X is hard to describe. Just as, in contrast you understand, my deep admiration seems clear and easily described for Statesman Shirley Chisholm and Champion Muhammad Ali, as two contemporary examples.

In fact, I distinctly remember this…

By the time that King died, when I ran out and bought a copy of it, by then the cheap massive printing of Malcolm's Autobiography was a thick compact paperback on best newsprint, available on paperback racks across the country.

And inside of that edition's back cover, the last page, there was supposedly a dumbfounding news photo, a photo of the crowd on the city sidewalk outside the auditorium, while inside those doors Malcolm lay sprawled in blood on stage, among the scattered chairs, the hero still lying there when a news photographer arrived and snapped the outside picture. A martyr made.

I mean to say, I remembered this photo of that sidewalk crowd's astonishing and anguishing gestures and faces, sub-minuscule dots of printer's black on good newsprint palest gray, the shocked crowd around the outside doors, a sacred temple threshold, a thing of such humanity to seize your breath away, or so I thought, when I sat down to write this book of mine.

And I decided mine must be a poem novel. The most intimate kind, a guided tour of the writer's soul. For me therefore turned out to be a poetic seeking toward my fantastic vision of a holy shrine. A literary pilgrimage to a Xanadu sprung from Soul instead of Hollywood.

Are you aware that expert modern artists make up stupid rules for their art projects? The expert ones with hard projects. Is that surprising? A fruitful modernist Dada mode. It conjures Guidance.

Well, for this poem novel I invented this rule… It was only after those 18 months, plus more weeks too after I put it on the shelf, that finally I sifted through my book stacks, and found that thick compact paperback on brown aging best newsprint, bought from a Houston drug store the morning after Dr. King was killed, and I looked inside. The photo isn't there. It never was.

But now I've written several other paperbacks successfully, and many poems, and that rule has woken up and begun telling me it's time to start this hard project up again. Like the time when I discovered I could finally paint well.

Take it down from the shelf of art supplies, up there beside the Merlin novel. Okay.

I too stepped into a manhood world of many active warring sides. And I read Malcolm's Autobiography, and viewed that imaginary photo at the end of it, picturing news of Malcolm's death. And faced with this demand for sacred action, I picked his side.

And I can tell you this from observation… Malcolm X was a Leading Chaplain to the beleaguered U.S. Army private soldiers of my time. As, for one example, Malcolm was transmitted through my beating heart into a U.S. Army place where I was.

The deepness of the message, where I was, was this… Its irreversible spiritual stepping out of violence into a ceaseless cry for peace.

And so to speak, to me it meant finding and stepping in those temple doors in my imagined photograph. To pay my deep devotion and high respect. To ask the hero if I have done the Sacred Duty well.

As I have it, the fully finished and neatly stitched up Draft Five of it, it was even ready for a little private trial distribution till I hid it on a shelf. Afraid for my reputation. Because its wording style is circling rambling gibberish just pointing round and round.

A style from an earlier book, an interesting wording style which this book wrecks by pointing round and round. So that needs work. Or does it? 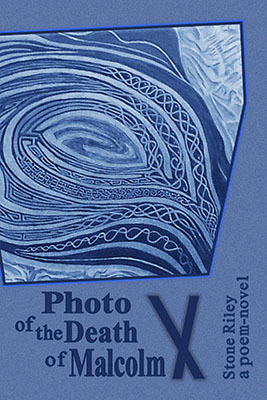 Above: Current design for the paperback book's front cover.

A poet writing essays. Why the title? You know you keep a large size shoe box with all those creative ideas and suchlike stuff scribbled on the back of electric bill envelopes?