Tomorrow's Chances Feel Like a Singin... She's Not a Girl Who Misses Much

Privacy Is My Middle Name, My Last Name Is Control

When I was little, my mother told me that in Chinese tradition, someone celebrating a birthday doesn't receive gifts--they give presents to others. Perhaps there's some element of truth to that concept; perhaps it was just something my mother told me to help me get over the fact that I wasn't being fêted with wrapped packages every October. (We were Jehovah's Witnesses, and watching the rounds of cards and cupcakes on my classmates' birthdays left me wide-eyed and wanting.) Although I've never found any evidence of this supposed practice in the cursory internet searches I've conducted, the idea of gift-giving as a way to show gratitude for one more year on this planet has always felt like the right thing to do. Usually I find something shiny and/or delicious to offer to a close friend or to my partner, but this year, I tried something different. I became a book fairy.

I love the idea of finding books in unexpected spots, and in honor of the tenth anniversary of Goodreads, the Book Fairies invited people around the world to hide books in public places. Since it's also been ten years since I joined this bookish online community, I chose ten books--five of my favorites, five of my partner's favorites--to share with unsuspecting passersby. I spent my birthday walking around the greater Portland area, leaving books in my wake. Here, you can see a few in their not-at-all-natural habitat: 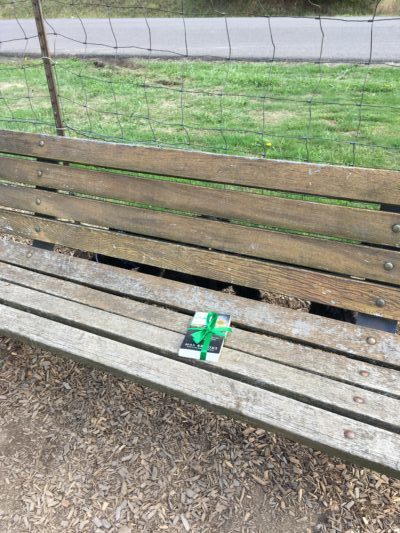 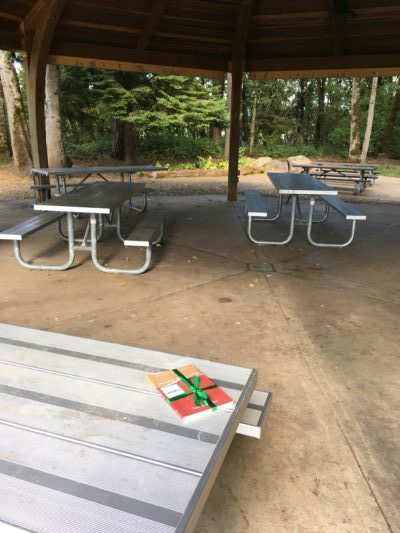 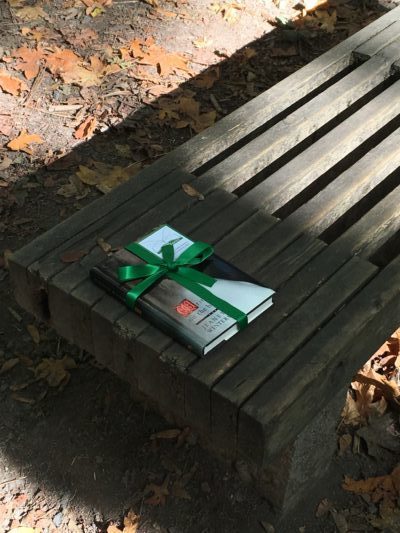 (If you squint–and are equipped with magical CSI-style photo enhancement–you can probably make out the titles: World War Z: An Oral History of the Zombie War, Jagged with Love, Written on the Body.)

I was also celebrating something else that day. After a hundred days of intense writing, followed by another hundred and sixty days of hemming and hawing, rearranging and revising, I put the finishing touches on a new poetry manuscript! "Again" began as the Inauguries project--my attempt at coming to terms with the Trump presidency and at stealing the language back from his mouth. While I was in Vermont, other writers encouraged me to see if there might be a book in that project, and as it turns out, there is. (Well, a manuscript, anyway. It'll be up to the fine folks who read for poetry presses to figure out if there's actually a book there.) In any case, I felt relieved and triumphant to see all those poems stacked together, to read them out loud over and over and feel the heft of the words in my mouth. Sometimes it's the mere making of the thing that matters.

And finally, one last celebration: Nasty Women Poets: An Unapologetic Anthology of Subversive Verse is in print! It arrived at my house a few days ago, and I spent hours absorbed in it. It's been quite some time since an anthology has caught me up like that. Of course, it doesn't hurt that it includes some of my favorite poets (too many to name), but there were also many poets whose names I didn't recognize, and their work floored me, too. Grace Bauer and Julie Kane did a marvelously nasty job of putting the anthology together, and their section titles' nods to singers and songwriters take after my own heart. Thanks to all the nasty poets out there for the song and swagger, the rhythm and resistance. You're a gift, too.
1 like · Like  •  0 comments  •  flag