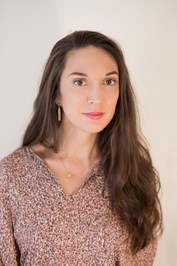 Born
The United States
Website
http://www.juliawhicker.com/
Genre
Fiction, Contemporary, Fantasy
Member Since
October 2017
edit data
Julia Whicker is a graduate of the Iowa Writers’ Workshop where she won both the prestigious Capote Fellowship and the Teaching-Writing Fellowship. She’s had her poetry published in the Iowa Review, Word Riot and The Millions, among others, and has been nominated for a Pushcart Prize. A version of the first chapter of Wonderblood was published in the literary journal, Unstuck.

She lives with her husband and daughter in Pennsylvania.

Julia Whicker is currently reading
SuperMars: Where We Really Came From And Where We'll Go When The World Ends
by Ellis Silver
bookshelves: currently-reading

More of Julia's books…
Quotes by Julia Whicker  (?)
Quotes are added by the Goodreads community and are not verified by Goodreads. (Learn more)
“Magic, like nostalgia, was like a lie; empty and full all at once.”
― Julia Whicker, Wonderblood
tags: magic, nostalgia
1 likes
Like

“A new happiness had settled over him and he seemed relieved. She wondered if he’d been testing himself: how long until she trusted him, would she ever? A king must inspire trust. And for her, a miracle too: she’d chosen this, or felt like she had. He needed her. To keep him calm. To map out every one of a thousand horrible deaths that might befall him in the coming months or years. He was afraid of his destiny, chokingly, overwhelmingly afraid, and suddenly it didn’t matter whether he believed in magic or she did or if it was real or if her mother was right and they were all just fools walking in a pointless, bloody parade toward the end of time. Her eyes were open. She could run or not, she could love him or not, she could miss her brother or hate him forever. It was all going to hurt.”
― Julia Whicker, Wonderblood
0 likes
Like

“From time to time, Marvel enjoyed imagining himself from the vantage point of history, which stretches onward until the morality of events is winnowed until it appears to be fate—one action begetting the next and so on. Progress. This was the place where treachery and failure transformed themselves. What once seemed terrible could become courageous if given enough time. Marvel imagined that one day his sins might be tallied as virtues, that time could render him honorable, as he knew himself to be.”
― Julia Whicker, Wonderblood
tags: fate, perspective, time
0 likes
Like

Thank you very much, Julia, for adding me as a friend on your Goodreads site. I truly appreciate it.