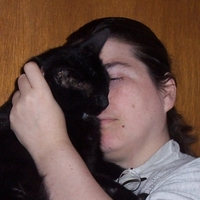 Born
in Canada
Website
http://prysmcat.com
Genre
Fantasy
Member Since
May 2014
URL
https://www.goodreads.com/prysmcat
edit data
I write fantasy novels, often urban, frequently with alternative sexuality/gender themes. I've been writing for over two decades and have several completed novels, but have finally begun to look for more effective ways to get them into the world.

I would rather be writing than doing almost anything, except perhaps spending time with my three rescued cats. However, when not doing either, I'm generally making cat toys or doing something involving the lolanimals site I run.

Or, Why My Writing Has Been Disrupted So Long On the 17th of September, 2019, Jacquelyn LaRonde, a trans woman who had been accused of having sex with a minor, was finally acquitted, after a struggle that took two and a half years and took a brutally high toll on an innocent woman and quite a lot of other people. Just to set the stage: Jackie is in her late forties. She has known she was a woman f Read more of this blog post »
View more on Steph Shangraw's website »
Like  •  0 comments  •  flag

Kyra Halland
author of
Beneath t...