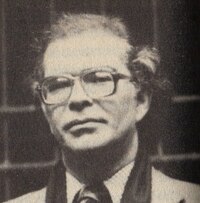 Born
in Bronx, New York, The United States
May 17, 1943
Died
June 03, 2011
Genre
Horror
edit data
Alan Peter Ryan was an American author and editor, known for his work in the horror genre in the 1980s.

“He had gone again and, emboldened by his first successful trip, had chosen a different sort of world to enter, that of THE MONK. He had studied the book with great care and finally selected a passage that was purely descriptive.

The result was the same. The instant he closed the top of the showcase, he was transported to the world described in the open pages. He found himself standing - and shivering - in a dank corridor that, he knew, was far underground. Feeble candlelight flickered in the distance, off to his left. Water dripped down the gleaming walls and startled rats scurried past his feet. The air was stale and unpleasant. Down the corridor to his left, he could hear singing but could not make out the words. Then suddenly, from his right, he heard a woman's high-pitched scream, its sound caroming off the wet, stone walls of the passageway. He jumped, his skin crawling at the back of his neck.

And found himself back in his warm and familiar room.