,
Discover new books on Goodreads
See if your friends have read any of Rowan Williams's books 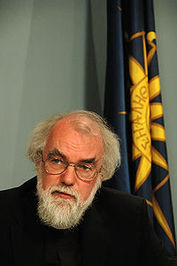 Born
in Ystradgynlais, Swansea, Wales
June 14, 1950
Website
http://rowanwilliams.archbishopofcanterbury.org
Genre
Religion & Spirituality, Poetry
edit data
Rowan Douglas Williams, Baron Williams of Oystermouth, is an Anglican bishop, poet, and theologian. He was Archbishop of Canterbury from December 2002-2012, and is now Master of Magdalene College, Cambridge and Chancellor of the University of South Wales.

Reflections for the Season of Lent (2 books)
by
Rowan Williams

A little book of guidance (2 books)
by
Rowan Williams

“The Reformation was an attempt to put the Bible at the heart of the Church again--not to give it into the hands of private readers. The Bible was to be seen as a public document, the charter of the Church's life; all believers should have access to it because all would need to know the common language of the Church and the standards by which the Church argued about theology and behaviour. The huge Bibles that were chained up in English churches in the sixteenth century were there as a sign of this. It was only as the rapid development of cheap printing advanced that the Bible as a single affordable volume came to be within everyone's reach as something for individuals to possess and study in private. The leaders of the Reformation would have been surprised to be associated with any move to encourage anyone and everyone to form their own conclusions about the Bible. For them, it was once again a text to be struggled with in the context of prayer and shared reflection.”
― Rowan Williams, Tokens of Trust
11 likes
Like

“[T]here is no goodness that is not bodily and realistic and local.”
― Rowan Williams, Where God Happens: Discovering Christ in One Another and Other Lessons from the Desert Fathers
11 likes
Like

Is this you? Let us know. If not, help out and invite Rowan to Goodreads.