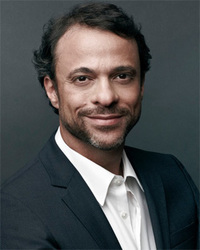 Website
http://www.davidkushner.com/
Genre
Nonfiction, Biographies & Memoirs
edit data
David Kushner is an award-winning journalist and author. He is a contributing editor of Wired, Rolling Stone, and Spectrum and is an adjunct professor of journalism at New York University.

· 24,245 ratings · 2,300 reviews · 26 distinct works • Similar authors
More books by David Kushner…
Quotes by David Kushner  (?)
Quotes are added by the Goodreads community and are not verified by Goodreads. (Learn more)
“In the information age, the barriers just aren’t there,” he said. “The barriers are self-imposed. If you want to set off and go develop some grand new thing, you don’t need millions of dollars of capitalization. You need enough pizza and Diet Coke to stick in your refrigerator, a cheap PC to work on, and the dedication to go through with it. We slept on floors. We waded across rivers.”
― David Kushner, Masters of Doom: How Two Guys Created an Empire and Transformed Pop Culture
16 likes
Like

“All they needed was a title. Carmack had the idea. It was taken from The Color of Money, the 1986 Martin Scorsese film in which Tom Cruise played a brash young pool hustler. In one scene Cruise saunters into a billiards hall carrying his favorite pool cue in a stealth black case. “What you got in there?” another player asks.
Cruise smiles devilishly, because he knows what fate he is about to spring upon this player, just as, Carmack thought, id had once sprung upon Softdisk and as, with this next game, they might spring upon the world.
“In here?” Cruise replies, flipping open the case. “Doom.”
― David Kushner, Masters of Doom: How Two Guys Created an Empire and Transformed Pop Culture
9 likes
Like

“He was sentenced to one year in a small juvenile detention home in town. Most of the kids were in for drugs. Carmack was in for an Apple II.”
― David Kushner, Masters of Doom: How Two Guys Created an Empire and Transformed Pop Culture
8 likes
Like