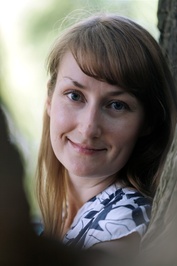 More of Emmi's books…
Quotes by Emmi Itäranta  (?)
Quotes are added by the Goodreads community and are not verified by Goodreads. (Learn more)
“Water is the most versatile of all elements. It isn't afraid to burn in fire or fade into the sky, it doesn't hesitate to shatter against sharp rocks in rainfall or drown into the dark shroud of the earth. It exists beyond all eginnings and ends. On the surface nothing will shift, but deep in underground silence, water will hide and with soft fingers coax a new channel for itself, until stone gives in and slowly settles around the secret space.
Death is water's close companion, and neither of them can be separated from us, for we are made of the versatilitiy of water and the closeness of death. Water doesn't belong to us, be we belong to water: when it has passed through our fingers and pores and bodies, nothing separates us from earth.”
― Emmi Itäranta, Memory of Water
tags: life-and-death, reflection, versatility, water
35 likes
Like

“Silence is not empty or immaterial, and it is not needed to chain tame things. It often guards powers strong enough to shatter everything.”
― Emmi Itäranta, Memory of Water
tags: promises, shatter, silence, tame
14 likes
Like

“Secrets carve us like water carves stone. On the surface nothing will shift, but things we cannot tell anyone chafe and consume us, and slowly our life settles around them, moulds itself into their shape.

Secrets gnaw at the bonds between people. Sometimes we believe they can also build them: if we let another person into the silent space a secret has made within us, we are no longer alone there.”
― Emmi Itäranta, Memory of Water
tags: relationships, secrets
7 likes
Like

What should we read for our group read in December?