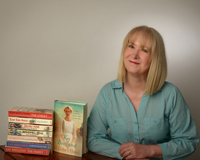 “Campbell Road, so he had been told by long-serving colleagues, and some of The Bunk’s inhabitants, was home to the most notorious criminals: thieves, prostitutes, fraudsters – every sort of rogue and vagabond drifted through this slum. Unbelievable as it seemed to Franks, some had settled and been resident a very long while. If a couple of women – one who looked like she’d had seven bells beaten out of her – wanted to set about a well-known brass, it didn’t take a genius to work out that one of their old men was playing away. Bickerstaff might be a stickler for doing things by the book but, in the great scheme of things, this was a petty domestic incident. The Bunk community had its own system of justice. Franks agreed with it: leave them be to shovel up their own shit.”
― Kay Brellend, The Street
tags: criminals, feisty, gritty, gritty-reads, london, revenge, saga, sagas, the-street, urban
1 likes
Like

“asked, smiling at her friend’s”
― Kay Brellend, The Windmill Girls
0 likes
Like