Discover new books on Goodreads
See if your friends have read any of S. Craig Zahler's books 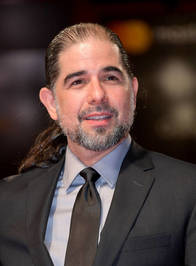 Novelist S. Craig Zahler is also the screenwriter, director, and musical co-composer for the movies, Bone Tomahawk, Brawl in Cell Block 99, and Dragged Across Concrete.
His debut graphic novel, Forbidden Surgeries of the Hideous Dr. Divinus (which he wrote and illustrated) and his crime book The Slanted Gutter are out this February,

"Five-plus stars to Hug Chic "S. Craig Zahler is certain to become one of the great imaginers of our time." ― Clive Barker

Novelist S. Craig Zahler is also the screenwriter, director, and musical co-composer for the movies, Bone Tomahawk, Brawl in Cell Block 99, and Dragged Across Concrete.
His debut graphic novel, Forbidden Surgeries of the Hideous Dr. Divinus (which he wrote and illustrated) and his crime book The Slanted Gutter are out this February,

“CORPUS CHROME, INC describes one of the weirder post-singularity futures. The characters are very much alive. I was entertained throughout.” —Larry Niven, Hugo & Nebula award winning author

My dark western Wraiths of the Broken Land is also available in trade paperback, hardback and ebook editions. Below is some praise from Joe R. Lansdale, Booklist, Jack Ketchum, and Ed Lee:

"If you’re looking for something similar to what you’ve read before, this ain’t it. If you want something comforting and predictable, this damn sure ain’t it. But if you want something with storytelling guts and a weird point of view, an unforgettable voice, then you want what I want, and that is this." –Joe R. Lansdale, author of The Bottoms, Mucho Mojo, and Savage Season

"It would be utterly insufficient to say that WRAITHS is the most diversified and expertly written western I’ve ever read." –Edward Lee, author of The Bighead and Gast.

"WRAITHS always rings true, whether it's visiting the depths of despair, the fury of violence, or the fragile ties that bind us together for good or ill. It's a Western with heart and intelligence, always vivid, with characters you will detest or care about or both, powerfully written." –Jack Ketchum, author of Off Season and The Girl Next Door ...more

May links for new Felix Comic Art interview, Word Balloon interview as well as The Comics Journal website and more...

My debut graphic novel Forbidden Surgeries of the Hideous Dr. Divinus and new crime book The Slanted gutter are both widely available.

The kind words posted on Goodreads and Amazon for these works are helpful in spreading the word and very appreciated as are the likes/upvotes for these reviews...

Here is a fun interview I did on Felix Comic Art--
http://www.felixcomicart.com/podcastd...

“Sometimes art is supposed to upset you"
"Why?"
"It might help you work through some of your own bad feelings or change how you look at yourself or something you're experiencing or somebody who know or once knew. And often, there're hidden messages in this kind of art that you don't see right away-so it can make you think, which is never a bad thing.”
― S. Craig Zahler, Hug Chickenpenny: The Panegyric of an Anomalous Child
4 likes
Like

“Eyes that did not seem attached to anything rational stared out at the gentleman from a craggy canvas of inebriation, grief and hatred. In the leather holster that depended from John Lawrence Plugford’s waist sat a wide gauge sawed-off shotgun that had been covered with black paint. “Good morning,” Nathaniel said to the bestial face.”
― S. Craig Zahler, Wraiths of the Broken Land
1 likes
Like

“A long time is not the same as always.”
― S. Craig Zahler, A Congregation of Jackals
1 likes
Like

Hard SF — 1056 members — last activity Sep 17, 2021 02:12AM
This is a discussion group for this specific subgenre in SF where the plausibility of the science counts.

Richard Laymon
author of
The Trave...

Harry Whittington
author of
The Dooms...

"With DR. DIVINUS, Zahler arrives as a cartoonist fully formed. It's as if he's been doing this for twenty years. But it's only with this graphic novel, his first, that Zahler has turned his considerable creative talents toward comics. As a medium, comics should feel blessed."
--Benjamin Marra (Terror Assaulter, Night Business)

"S. Craig Zahler brings the same furious energy to his first graphic novel that he does to his music, movies and novels. Forbidden Surgeries of The Hideous Dr. Divinus is a deliberately paced weird horror story with punctuations of cruelty and uncomfortable hilarity." -- Josh Simmons (The Furry Trap, Black River)

"Zahler conjures the spirit of EC and weird visionary outlier comics but with way more story structure and momentum than those comics ever have. Comics is lucky to have his contribution to our medium!"
-- Dash Shaw (Bodyworld, Bottomless Belly Button)

"Zahler has produced something otherworldly ... with hints of those classic 80's underground B&W outlaw comics that we all love so much. This is something different and unexpected and I would highly recommend it!
-- Jim Mahfood, Grrl Scouts, Tank Girl, Into The Spider-Verse

Available for pre-order at:
https://www.amazon.com/Forbidden-Surg...

“CORPUS CHROME, INC describes one of the weirder post-singularity futures. The characters are very much alive. I was entertained throughout.” —Larry Niven, multiple Hugo and Nebula award winning author of the Ringworld series

“[We fell] completely under Zahler’s spell, buying into his near-future world and becoming so involved in his characters’ lives that, when the book ends, we are loath to leave these people and their world. A bravura literary performance.” —Dave Pitt, Booklist, Starred Review