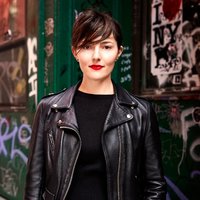 Twitter
lizzydgoodman
Genre
Music
edit data
Lizzy Goodman is a journalist whose writing on rock and roll, fashion, and popular culture has appeared in the New York Times, Rolling Stone, and NME. She is a contributing editor at ELLE and a regular contributor to New York magazine. She lives in upstate New York with her two basset hounds, Joni Mitchell and Jerry Orbach.

“Stewart Lipton: Our fling lasted on and off between girlfriends for our whole career, sort of. I don’t think she would be that excited about me telling you that.

Erin Norris: How is Stevie, by the way? I fucking hate his guts.”
― Lizzy Goodman, Meet Me in the Bathroom: Rebirth and Rock and Roll in New York City 2001-2011
2 likes
Like

“You know how they say Black Flag got in a van, and they brought punk rock to the world? The Strokes got on a bus, and they brought “downtown cool” to the world. Along with the Internet, they were changing everything, not just music. They were changing attitudes. The Strokes were making New York travel with them. I saw kids in Connecticut and Maine and Philadelphia and DC looking like they had just been drinking on Avenue A all night. Sixteen-year-old kids in white belts and Converse Chuck Taylors with the greasy hair—hair that had been clean a week ago. Those kids had probably never even smelled the inside of a thrift store before Is This It came out. They found a band that they wanted to be like. They found their band. APRIL”
― Lizzy Goodman, Meet Me in the Bathroom: Rebirth and Rock and Roll in New York City 2001-2011
1 likes
Like

“TUNDE ADEBIMPE: Failure is the best. After you fail, you’re free.”
― Lizzy Goodman, Meet Me in the Bathroom: Rebirth and Rock and Roll in New York City 2001-2011
0 likes
Like


Is this you? Let us know. If not, help out and invite Lizzy to Goodreads.