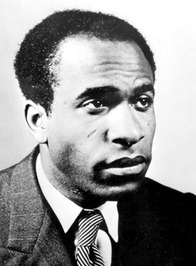 Born
in Martinique
July 20, 1924
Died
December 06, 1961
Website
http://frantzfanonfoundation-fondationfrantzfan...
Genre
Politics, Philosophy, Post Colonialism
Influences
Négritude, Jean-Paul Sartre
edit data
Frantz Fanon was a psychiatrist, philosopher, revolutionary, and author from Martinique. He was influential in the field of post-colonial studies and was perhaps the pre-eminent thinker of the 20th century on the issue of decolonization and the psychopathology of colonization. His works have inspired anti-colonial liberation movements for more than four decades.

“Sometimes people hold a core belief that is very strong. When they are
presented with evidence that works against that belief, the new
evidence cannot be accepted. It would create a feeling that is
extremely uncomfortable, called cognitive dissonance. And because it
is so important to protect the core belief, they will rationalize,
ignore and even deny anything that doesn't fit in with the core belief.”
― Frantz Fanon, Black Skin, White Masks
tags: liberation, politics, psychology, revolution
1100 likes
Like

“To speak a language is to take on a world, a culture.”
― Frantz Fanon
tags: linguistics, politics, psychology
382 likes
Like

“Each generation must discover its mission, fulfill it or betray it, in relative opacity.”
― Frantz Fanon, The Wretched of the Earth
266 likes
Like

Which book do you want to read in French for Northern Africa in Jul/Aug 2019?