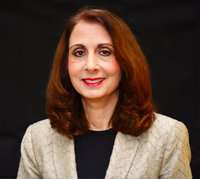 
Erika Grey hosts Prophecy Talk" on YouTube. Erika is a member of the society of professional Erika Grey is an Evangelical Christian author, Bible Prophecy expert, journalist and commentator, www.erikagrey.com features Erika's books, articles and video broadcasts. Erika Grey focuses on current world affairs, and their relation to Bible Prophecy from an analytical and geopolitical view point. Erika first coined the term "geopolitical" in relation to Bible Prophecy, which is now used in writings by renown prophecy teachers. Within Evangelical Christian circles, Erika Grey is the leading authority on the EU and Bible Prophecy, which is evidenced by her exposes and books on the European Union, for which Erika speaks on radio shows across the U.S.


Erika Grey hosts Prophecy Talk" on YouTube. Erika is a member of the society of professional journalists and holds high standards in her reporting of end time news. For this reason Erika sets herself apart from other End Time Bible Prophecy Ministries and labels herself as a Magi, from the Bible meaning wise men or wise women. She models her ministry and work on the Biblical magi who were analysts and learned men and women in the knowledge and disciplines of their day. At the time of Christ, Herod consulted the Magi who understood the prophetic predictions when there were no living prophets. ...more

Summary of the E.U. Treaties on Political Union

The EU has been evolving politically since the early 1990′s. A series of treaties amended the original E.U. treaties strengthening the EU government thus giving the E.U. a political dimension. These are:

Erika Grey is currently reading
The Yahoo! Style Guide: The Ultimate Sourcebook for Writing, Editing, and Creating Content for the Digital World
by Yahoo!
bookshelves: currently-reading

PF2018 - a miracle year! Thank you for your friendship, Karel