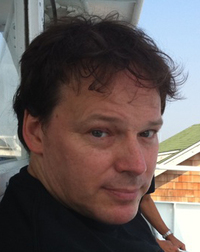 On June 15, 2007, Graeber accepted the offer of a lectureship in the anthropology department at Goldsmiths College, University of London, where he currently holds the title of Reader in Social Anthropology.

He was an associate professor of anthropology at Yale University, although Yale controversially declined to rehire him, and his term there ended in June 2007.

Graeber has a history of social and political activism, including his role in protests against the World Economic Forum in New York City (2002) and membership in the labor union Industrial Workers of the World.

David rated a book it was amazing
Can You Stiff Your Divorce Lawyer? Tales of How Cunning Clients Can Get Free Legal Work, as Told by an Experienced Divorce Attorney
by Portia Porter (Goodreads Author)
bookshelves: currently-reading

David is currently reading
The Bureaucratization of the World
by Henry Jacoby
bookshelves: currently-reading

“Freuchen tells how one day, after coming home hungry from an unsuccessful walrus-hunting expedition, he found one of the successful hunters dropping off several hundred pounds of meat. He thanked him profusely. The man objected indignantly:

"Up in our country we are human!" said the hunter. "And since we are human we help each other. We don't like to hear anybody say thanks for that. What I get today you may get tomorrow. Up here we say that by gifts one makes slaves and by whips one makes dogs.

... The refusal to calculate credits and debits can be found throughout the anthropological literature on egalitarian hunting societies. Rather than seeing himself as human because he could make economic calculations, the hunter insisted that being truly human meant refusing to make such calculations, refusing to measure or remember who had given what to whom, for the precise reason that doing so would inevitably create a world where we began "comparing power with power, measuring, calculating" and reducing each other to slaves or dogs through debt. It's not that he, like untold millions of similar egalitarian spirits throughout history, was unaware that humans have a propensity to calculate. If he wasn't aware of it, he could not have said what he did. Of course we have a propensity to calculate. We have all sorts of propensities. In any real-life situation, we have propensities that drive us in several different contradictory directions simultaneously. No one is more real than any other. The real question is which we take as the foundation of our humanity, and therefore, make the basis of our civilization.”
― David Graeber, Debt: The First 5,000 Years

“If history shows anything, it is that there's no better way to justify relations founded on violence, to make such relations seem moral, than by reframing them in the language of debt—above all, because it immediately makes it seem that it's the victim who's doing something wrong.”
― David Graeber, Debt: The First 5,000 Years
tags: debt, morality, violence
57 likes
Like

“Traditional hedonism...was based on the direct experience of pleasure: wine, women and song; sex, drugs and rock 'n' roll; or whatever the local variant. The problem, from a capitalist perspective, is that there are inherent limits to all this. People become sated, bored...Modern self-illusory hedonism solves this dilemma because here, what one is really consuming are fantasies and day-dreams about what having a certain product would be like.”
― David Graeber, Possibilities: Essays on Hierarchy, Rebellion, and Desire
tags: anarchy, capitalism, redefining-consumption
43 likes
Like

“Rather than seeing himself as human because he could make economic calculations, the hunter insisted that being truly human meant refusing to make such calculations, refusing to measure or remember who had given what to whom, for the precise reason that doing so would inevitably create a world where we began "comparing power with power, measuring, calculating" and reducing each other to slaves or dogs through debt.”
― David Graeber, Debt: The First 5,000 Years
21 likes
Like

“Political economy tends to see work in capitalist societies as divided between two spheres: wage labor, for which the paradigm is always factories, and domestic labor – housework, childcare – relegated mainly to women. The first is seen primarily as a matter of creating and maintaining physical objects. The second is probably best seen as a matter of creating and maintaining people and social relations.
[...] This makes it easier to see the two as fundamentally different sorts of activity, making it hard for us to recognize interpretive labor, for example, or most of what we usually think of as women’s work, as labor at all. To my mind it would probably be better to recognize it as the primary form of labor. Insofar as a clear distinction can be made here, it’s the care, energy, and labor directed at human beings that should be considered fundamental. The things we care most about – our loves, passions, rivalries, obsessions – are always other people; and in most societies that are not capitalist, it’s taken for granted that the manufacture of material goods is a subordinate moment in a larger process of fashioning people. In fact, I would argue that one of the most alienating aspects of capitalism is the fact that it forces us to pretend that it is the other way around, and that societies exist primarily to increase their output of things.”
― David Graeber, Revolutions in Reverse: Essays on Politics, Violence, Art, and Imagination
tags: alienation, capitalism, communism, feminism, free-market
26 likes
Like

“In fact this is precisely the logic on which the Bank of England—the first successful modern central bank—was originally founded. In 1694, a consortium of English bankers made a loan of £1,200,000 to the king. In return they received a royal monopoly on the issuance of banknotes. What this meant in practice was they had the right to advance IOUs for a portion of the money the king now owed them to any inhabitant of the kingdom willing to borrow from them, or willing to deposit their own money in the bank—in effect, to circulate or "monetize" the newly created royal debt. This was a great deal for the bankers (they got to charge the king 8 percent annual interest for the original loan and simultaneously charge interest on the same money to the clients who borrowed it) , but it only worked as long as the original loan remained outstanding. To this day, this loan has never been paid back. It cannot be. If it ever were, the entire monetary system of Great Britain would cease to exist.”
― David Graeber, Debt: The First 5,000 Years
tags: banking, debt, england, money
33 likes
Like

“If history shows anything, it is that there's no better way to justify relations founded on violence, to make such relations seem moral, than by reframing them in the language of debt—above all, because it immediately makes it seem that it's the victim who's doing something wrong.”
― David Graeber, Debt: The First 5,000 Years
tags: debt, morality, violence
57 likes
Like

Silvia Federici
author of
Caliban a...