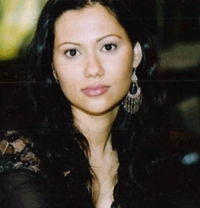 Born
in Teheran, Iran
November 11, 1977
Died
April 30, 2014
Website
http://www.marshamehran.com
Genre
Literature & Fiction
edit data
Marsha Mehran escaped the upheaval of the Iranian revolution with her family. She grew up in the United States, Australia and Argentina, where her parents operated a Middle Eastern café. She lived in both Brooklyn and Ireland.

“It is the pomegranate that gives 'fesenjoon' its healing capabilities. The original apple of sin, the fruit of a long gone Eden, the pomegranate shields itself in a leathery crimson shell, which in Roman times was used as a form of protective hide. Once the pomegranate's bitter skin is peeled back, though, a juicy garnet flesh is revealed to the lucky eater, popping and bursting in the mouth like the final succumber of lovemaking.
Long ago, when the earth remained still, content with the fecundity of perpetual spring, and Demeter was the mother of all that was natural and flowering, it was this tempting fruit that finally set the seasons spinning. Having eaten six pomegranate seeds in the underworld, Persephone, the Goddess of Spring's high-spirited daughter, had been forced to spend six months of the year in the eternal halls of death. Without her beautiful daughter by her side, a mournful Demeter retreated to the dark corners of the universe, allowing for the icy gates of winter to finally creak open. A round crimson herald of frost, the pomegranate comes to harvest in October and November, so 'fesenjoon' is best made with its concentrate during other times of the year.”
― Marsha Mehran, Pomegranate Soup
tags: mythology, pomegranate
2 likes
Like

“Unlike the classical Greeks, for whom the fruit symbolized the inescapable cycle of bitter death, with a remorseful Persephone returning to the underworld for her six months of required winter, Marjan liked to believe the old stories of Persian soothsayers, who held a different vision of the tart fruit's purpose in life. She liked to remember that above all else, above all the unfortunate connotations of death and winter, the pomegranate was, and always would be, the fruit of hope.
The flower of fertility, of new things and old seasons to be cradled.”
― Marsha Mehran, Pomegranate Soup
tags: hope, marjan-aminpour, pomegranate
2 likes
Like

“It would be easy to attribute Layla's effect on the opposite sex (and the occasional Sapphically inclined female) to her youth or sweet, natural perfume, but the real reason behind her attraction was far more complex. Of course, there was no denying her beauty, the consistency of her angled, porcelain features, that tilt in her almond eyes, which shined like half-moons across her celestial face. Unlike her two older sisters, who sported wayward brown ringlets, Layla had hair that was long and jet black. Tied up or let down, moussed or gelled, nothing could excite her stubbornly straight locks. They were a definite throwback to some latent Oriental chromosomes roaming deep inside of her.”
― Marsha Mehran, Pomegranate Soup
tags: exotic-beauty, layla-aminpour, physical-beauty, signature-scent
1 likes
Like