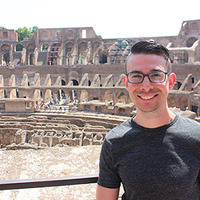 Born
The United States
Website
http://www.thebriansimons.com
Genre
Science Fiction, Fantasy, Ebooks
Member Since
February 2017
edit data
If Brian Simons were an action figure, he would come pre-equipped with a coffee cup jammed into one hand socket and an e-reader in the other. A former barista, corporate attorney, and health educator, Brian has finally started writing down the stories that have bottled up in his head.

Brian’s LitRPG stories are inspired by the never-too-many books and video games he has consumed his whole life. You may find him in a café near his Philadelphia home writing, reading, and worshiping a cup of sweet, sweet coffee.

“Incoming!” yelled a large green woman with a deep scratchy voice. She charged toward the river with the feline mob chasing behind.

“Varta!” Coral yelled. “You weren’t supposed to pull big game like this, I asked for mud golems!”

“Fight first, argue later please!” Varta barreled toward Coral as Coral readied her bow. She peered at the large cat while she aimed.