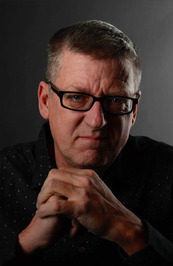 Derf hasn't connected with their friends on Goodreads, yet.

Born
Richfield, Ohio, The United States
Website
http://www.derfcity.com
Twitter
DerfBackderf
Genre
Comics & Graphic Novels
Member Since
April 2014
edit data
John Backderf is a Eisner-award-winning American comics creator, also known as Derf Backderf. He is most famous for his recent graphic novels, especially My Friend Dahmer, the international bestseller which won an Angoulême Prize, and earlier for his comic strip The City, which appeared in a number of alternative newspapers from 1990–2014.

Derf has been nominated for multiple Eisner, Harvey and Ignatz awards and a Rueben Award. In 2006, he won the Robert F. Kennedy Journalism Award for political cartooning. Backderf has been based in Cleveland, Ohio, for much of his career.

“He was a nobody. One of those shy kids who turned into social invalids when that first blast of adolescence hit, meekly accepted their fate, and became invisible.”
― Derf Backderf, My Friend Dahmer
7 likes
Like

“It's my belief that Dahmer didn't have to wind up a monster, that all those people didn't have to die horribly, if only the adults in his life hadn't been so inexplicably, unforgivably, incomprehensibly clueless and/or indifferent. Once Dahmer kills, however - and I can't stress this enough - my sympathy for him ends. He could have turned himself in after that first murder. He could have put a gun to his head. Instead he, and he alone, chose to become a serial killer and spread misery to countless people. There are a surprising number out there who view Jeffery Dahmer as some kind of anti-hero, a bullied kid who lashed back at the society that rejected him, This is nonsense. Dahmer was a twisted wretch whose depravity was almost beyond comprehension. Pity him, but don't empathize with him.”
― Derf Backderf, My Friend Dahmer
3 likes
Like

Which True Crime book would you like to read in June?