Someone who went the the Hieroglyph event at Kepler's created us our own cat meme: 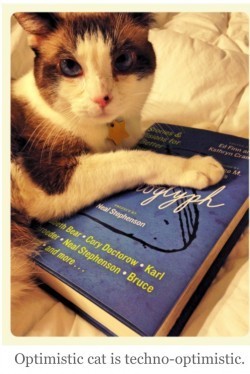 Meanwhile, the next stop for the HIEROGLYPH Road Show is the Zócalo Public Center in LA on 9/15/14. That event appears to have a waiting list

Hieroglyph: Stories and Visions for a Better Future 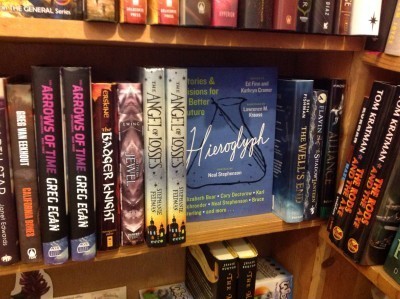 Copies of Hieroglyph nestled on the shelves of Dark Carnival bookstore in Berkeley, CA.

Borderlands in San Francisco gets their copies of Hieroglyph in Tuesday.
Like  •  0 comments  •  flag 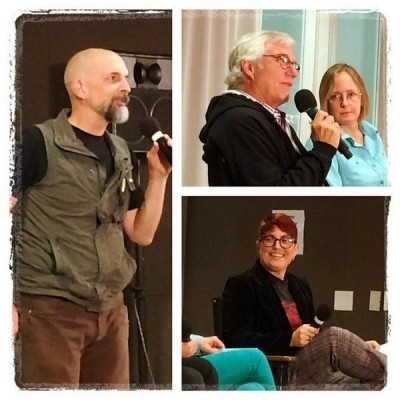 I'd like to thank Google for having us here today; and Neal Stephenson, Ed Finn, and Jennifer Brehl, for the chance to collaborate.

And thank you all for joining us for the first event of our Hieroglyph Roadshow. In July of 2011, Neal asked me if I was interested in working on this book. It only took us three years to get here!

In the 1920s, Hugo Gernsback named our genre science fiction and described it as: engaging narrative that contains scientific information and prophetic visions. Debate over whether SF should be technologically optimistic has gone on at least as long as science fiction has had that name.

Many pairs of opposites have kicked around in discussions of optimism and pessimism. Golden Age SF vs. the New Wave, American SF vs. British, science fiction vs. speculative fiction, cynics vs. Pollyannas, happy endings vs. downers, sympathetic characters vs. unsympathetic, idea-driven stories vs. character-driven, clear journalistic prose as opposed to stylistic sophistication, populism vs. the literary, realism vs. the fantastic, "playing with the net up" rather than more fanciful fabulation, free will vs. predestination, militarism vs. pacifism, activism vs. learned helplessness, utopia vs. dystopia, the influence of Henry James vs. that of H. G. Wells, genre fiction vs. stuff supposedly so good it's not SF, and what is contrasted with what could be.

This last pair is the one most important to Hieroglyph. Our future is full of possibilities. Hieroglyph invites you to explore them. While as editors, Ed and I want you to have the best possible reading experience, Hieroglyph is not so much aimed at how you feel as what you DO.

In the Gernsbackian tradition, Hieroglyph is a visionary book. But Hieroglyph's goal is not so much to predict as to inspire, to engage writers and scientists, engineers and other creative thinkers, with science and technology's utopian potential. The future doesn't just happen. Moment by moment, we help invent it. Some of us invent futures for a living. If we don't invent futures we want to live in, who will do it for us? As Ursula K. Le Guin said, "Great artists make the roads."

There are precursors to Hieroglyph. Geoff Ryman's anthology When It Changed (2008): Ryman believes SF writers should rely less on what's called rubber science. He put scientists together with his writers. Jetse DeVries did an anthology of optimistic SF called Shine (2010). There is the Futures column in Nature, founded by Henry Gee, MIT's Technology Review occasionally publishes SF, and SF short stories sponsored by Intel, a program run by Brian David Johnson. Another precursor is the design fiction movement with which Bruce Sterling is associated. Gregory Benford's anthology Starship Century -- focused on space travel -- was edited in parellel with Hieroglyph, And there is the discipline of Foresight Studies, which both Madeline Ashby and Karl Schroeder studied in graduate school. And there are individual authors, such as Kim Stanley Robinson, who have been writing this way all along.

In 1978, when I was in high school, my father, John Cramer became a science columnist for his favorite science fiction magazine, Analog, formerly known as Astounding back when it was edited by John W. Campbell. Astounding was the flagship magazine of Golden Age SF. When my dad was an undergraduate at Rice, he submitted his first attempts at stories to Campbell. This was very meaningful to him later when he was nominated for the John W. Campbell Award for his hard SF novel, Twistor.

When I became an editor in the 1980s, that was the job I wanted. But Analog's editor Stan Schmidt remained its editor until about 2 years ago. Instead, I have edited about thirty anthologies, including two hard SF books, The Ascent of Wonder and The Hard SF Renaissance.
In August of 1967, my parents threw a farewell party for a man who was leaving Seattle to go to Mars. Yes, to Mars. I remember how the condensation on the glasses of the adults' gin and tonics bent the light; him leaning against the dishwasher talking about training to become an astronaut. I was five years old.

Joe Allen was leaving the University of Washington's Nuclear Physics Laboratory, where he was a post doc, to join NASA as one of the first scientist astronauts. There would be Apollo missions, to be followed by laboratories on the Moon, and then there was to be a mission to Mars!

You know he never got there. Nor did he get his lunar laboratory. But he did get to space.

Like all writers who come here, we want you to read our book and tell all your friends. And your enemies, too. But we ask more of you. We want you to participate in the Hieroglyph community and imagine better futures. We want you to think about infrastructure.

Hal Clement, when asked why his stories mostly lack villains, replied that the Universe is antagonist enough. Think longterm, think survival, not just for us as individuals, but for humanity, and for the species with which we share our Earth.

We are on the surface of a planet right now. Astronomy teaches us how rare and precious is this Earth. Let us learn how to remain.

Our book is the beginning of the project, not the end. We want to do more books, but also, we aim to broaden the project to reach many more people.

This is what Neal Stephenson does exceptionally well. It is why you are here. You can do it too. Let us all go forth and hieroglyph! 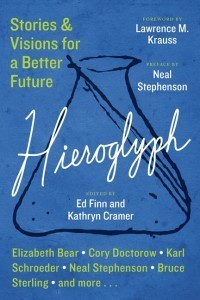 Hieroglyph Stories and Visions for a Better Future
I am pleased and proud to announce that Hieroglyph was published today in hardcover, ebook, and audio formats.
1 like · Like  •  0 comments  •  flag