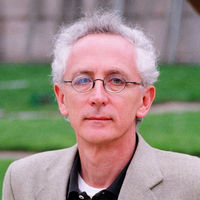 Born
South Africa
edit data
Emanuel Derman (born c. 1945) is a Jewish South African-born academic, businessman and writer. He is best known as a quantitative analyst, and author of the book My Life as a Quant: Reflections on Physics and Finance

“If you decide you don’t have to get A’s, you can learn an enormous amount in college.”
― Emanuel Derman, My Life as a Quant: Reflections on Physics and Finance
5 likes
Like

“Once, sitting in my car in the parking lot outside Building 5 during a prolonged downpour after a long lunch off premises, Mark, Larry, and I pondered the famous two-condom combinatorial problem that spread through the Center: Two (heterosexual) couples decide to have group sex with each other in all possible male-female combinations. They have only two condoms, and everyone is scared of catching some venereal disease. How can they manage four couplings with only two condoms? The first man puts on two condoms, one over the other, and then sleeps with the first woman. Only the outer surface of the outer condom and the inner surface of the inner one has had contact with any potentially infectious surface. The man removes the outer condom and sleeps with the second woman. The second man then dons the removed outer condom whose inner surface has until now had no contact with anyone’s skin, and sleeps with the first woman, whose only contact has thus far been with the outside of the same condom. Finally, the second man dons the second condom over the one he is already wearing, and sleeps with the second woman, who again only experiences a condom she has already touched. It was impossible to resist the temptation to generalize to N couples.”
― Emanuel Derman, My Life as a Quant: Reflections on Physics and Finance
4 likes
Like

“I wanted to be Feinberg's student, but I didn't know how to go about it. Since it was premature for formal arrangements and since I was naturally reticent and shy, I simply began to greet him very politely whenever our paths crossed. Graduate school was a small community. In corridors and elevators and on campus, I was soon running into Feinberg several times a day, always giving him a polite hello and a nice smile. He would reciprocate similarly with a sort of nervous curling of the lips. As time passed, this limbo of flirtatious foreplay continued unabated. I could never find the courage to broach the question of being his student; I supposed I must have hoped it would just happen wordlessly. Every time I saw him I smiled; every time I smiled he bared his lips back at me with greater awkwardness. Our facial manipulations bore increasingly less resemblance to anything like a real smile; each of our reciprocated gestures was a caricature, a Greek theatrical mask signaling friendliness. One day, on about the fifth intersection of our paths on that particular day, I could stand it no longer. I saw him heading towards me down one of the long dark, old-fashioned Pupin corridors, and immediately turned towards the nearest stairwell and went up one floor to avoid him. Having succeeded at this once, I was compelled to do it repeatedly. Soon I was moving upstairs or downstairs to another floor as soon as I saw him approaching, like the protagonist in some ghastly version of the video game Lode Runner.”
― Emanuel Derman, My Life as a Quant: Reflections on Physics and Finance
tags: columbia-university, geek, shyness, social-phobia
2 likes
Like

Is this you? Let us know. If not, help out and invite Emanuel to Goodreads.