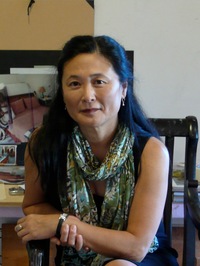 Website
https://americanstudies.yale.edu/people/lisa-lowe
Twitter
driftinghouse
Genre
Nonfiction
edit data
Lisa Lowe is Samuel Knight Professor of American Studies at Yale University. She is the author of Immigrant Acts: On Asian American Cultural Politics and The Intimacies of Four Continents and the coeditor of The Politics of Culture in the Shadow of Capital, all published by Duke University Press.

“...it is necessary to act within but to think beyond our received humanist tradition and, all the while, to imagine a much more complicated set of stories about the emergence of the now, in which what is foreclosed as unknowable is forever saturating the "what-can-be-known." We are left with the project of visualizing, mourning, and thinking "other humanities" within this received genealogy of "the human.”
― Lisa Lowe
5 likes
Like

“it may be very clear indeed who “owns” culture. It is pronounced in the official language all must learn to speak, is declared if you can’t afford to buy the garments that you are employed to sew, and is evident if your call to 911 fails to bring emergency assistance to your neighborhood.”
― Lisa Lowe, Immigrant Acts: On Asian American Cultural Politics
1 likes
Like


Is this you? Let us know. If not, help out and invite Lisa to Goodreads.