Discover new books on Goodreads
See if your friends have read any of L.D. Inman's books 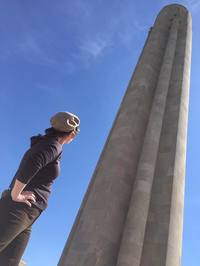 L.D. Inman is an essayist, lay preacher, habitual lurker on fannish social media, and sometime poet, who answered a stunning variety of reference questions in a long and checkered library career, before going into nonprofit communications and marketing. She lives, works, fences, and serves as cat staff in Kansas City.

This ain’t your usual Stadium Rock

According to Mark Polizzotti, when Nikita Khrushchev declared “We will bury you,” his immediate translators did not do the Russian phrase any favors. Rather than issuing a direct threat, Polizzotti says, Khrushchev was saying that they would survive, outlast, be vindicated by the eventual demise of, the West. Not that anyone in the West cared for nuance at the time; believing your enemy to be whol

“Critics who treat 'adult' as a term of approval, instead of as a merely descriptive term, cannot be adult themselves. To be concerned about being grown up, to admire the grown up because it is grown up, to blush at the suspicion of being childish; these things are the marks of childhood and adolescence. And in childhood and adolescence they are, in moderation, healthy symptoms. Young things ought to want to grow. But to carry on into middle life or even into early manhood this concern about being adult is a mark of really arrested development. When I was ten, I read fairy tales in secret and would have been ashamed if I had been found doing so. Now that I am fifty I read them openly. When I became a man I put away childish things, including the fear of childishness and the desire to be very grown up.”
― C.S. Lewis
tags: adult, childhood, children, maturity
1874 likes

“There is something in us, as storytellers and as listeners to stories, that demands the redemptive act, that demands that what falls at least be offered the chance to be restored. The reader of today looks for this motion, and rightly so, but what he has forgotten is the cost of it. His sense of evil is diluted or lacking altogether, and so he has forgotten the price of restoration. When he reads a novel, he wants either his sense tormented or his spirits raised. He wants to be transported, instantly, either to mock damnation or a mock innocence.”
― Flannery O'Connor, Mystery and Manners: Occasional Prose
tags: devil, evil, fiction, grace, on-fiction, storytelling, writing
285 likes

“When a book leaves your hands, it belongs to God. He may use it to save a few souls or to try a few others, but I think that for the writer to worry is to take over God's business.”
― Flannery O' Connor
9 likes

“A writer is a person who cares what words mean, what they say, how they say it. Writers know words are their way towards truth and freedom, and so they use them with care, with thought, with fear, with delight. By using words well they strengthen their souls. Story-tellers and poets spend their lives learning that skill and art of using words well. And their words make the souls of their readers stronger, brighter, deeper.”
― Ursula K. Le Guin
tags: brighter, le-guin, souls, writing
731 likes

“The trouble is that we have a bad habit, encouraged by pedants and sophisticates, of considering happiness as something rather stupid. Only pain is intellectual, only evil interesting. This is the treason of the artist; a refusal to admit the banality of evil and the terrible boredom of pain.”
― Ursula K. LeGuin, The Ones Who Walk Away from Omelas
tags: art, artists, evil, happiness, pain
895 likes