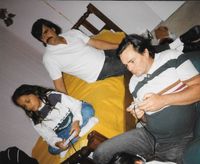 “The argument shifted, and she told me I was stupid to marry a man I had just met. It wasn't possible for me to know him. And when I tried to tell her what I loved about him—our shared worldview, the things we wanted out of life—she told me my version of love wasn't love. She told me love should be passionate, full of fireworks. She told me I had never loved her, that I always chose my father over her. I tried to explain that I took care of him so she didn't have to, that I took care of him out of love for them both. It was a crazy thing, to be screaming about love.”
― Danielle Geller, Dog Flowers: A Memoir
tags: family, love
0 likes
Like

“After my mother's pastor left her room, I stood there berating myself for agreeing to let him pray. If I were more like Eileen, I could channel my rage and do some real damage. I would be better equipped to stand up to men like him. But the longer I stood there, the more I realized I wasn't really angry at myself. I wasn't even angry at my mother. I was angry at things outside our control. I was angry at the broken communities we were born into, and the godly men who perpetuated the cycles of abuse. Who told us to seek happiness in ignorance and faith in a God who seemed indifferent to our suffering. Who taught us to forgive too readily, and that forgiveness restored power, when in my experience, forgiveness had only taken my power away.”
― Danielle Geller, Dog Flowers: A Memoir
tags: faith, forgiveness, suffering
0 likes
Like

“He soon acquired the forlorn look that one sees in vegetarians.”
― Gabriel García Márquez, One Hundred Years of Solitude
tags: humorous, vegetarianism
156 likes
Like

“It is conceivable that in principle man's motor through-ways resemble the slime trails along which are drawn the gathering mucors that erect the spore palaces, that man's cities are only the ephemeral moment of his spawning--that he must descend upon the orchard of far worlds or die.”
― Loren Eiseley
tags: speculative-science
0 likes
Like

“We take off into the cosmos, ready for anything: for solitude, for hardship, for exhaustion, death. Modesty forbids us to say so, but there are times when we think pretty well of ourselves. And yet, if we examine it more closely, our enthusiasm turns out to be all a sham. We don't want to conquer the cosmos, we simply want to extend the boundaries of Earth to the frontiers of the cosmos. For us, such and such a planet is as arid as the Sahara, another as frozen as the North Pole, yet another as lush as the Amazon basin. We are humanitarian and chivalrous; we don't want to enslave other races, we simply want to bequeath them our values and take over their heritage in exchange. We think of ourselves as the Knights of the Holy Contact. This is another lie. We are only seeking Man. We have no need of other worlds. A single world, our own, suffices us; but we can't accept it for what it is. We are searching for an ideal image of our own world: we go in quest of a planet, a civilization superior to our own but developed on the basis of a prototype of our primeval past. At the same time, there is something inside us which we don't like to face up to, from which we try to protect ourselves, but which nevertheless remains, since we don't leave Earth in a state of primal innocence. We arrive here as we are in reality, and when the page is turned and that reality is revealed to us - that part of our reality which we would prefer to pass over in silence - then we don't like it anymore.”
― Stanisław Lem, Solaris
tags: fiction, sci-fi
113 likes
Like

“Part of me thinks that your very vulnerability brings you closer to the meaning of life, just as for others, the quest to believe oneself white divides them from it. The fact is that despite their dreams, their lives are also not inviolable. When their own vulnerability becomes real--when the police decide that tactics intended for the ghetto should enjoy wider usage, when their armed society shoots down their children, when nature sends hurricanes against their cities--they are shocked in a way that those of us who were born and bred to understand cause and effect can never be.”
― Ta-Nehisi Coates, Between the World and Me
3 likes
Like