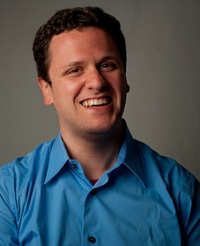 Website
http://freelanceastro.com/
Twitter
freelanceastro
Genre
Science, Nonfiction, Biography
Member Since
August 2017
edit data
Adam Becker is a science writer with a PhD in astrophysics from the University of Michigan and a BA in philosophy and physics from Cornell. He has written for the New York Times, the BBC, NPR, Scientific American, New Scientist, and others. He has also recorded a video series with the BBC and several podcasts with the Story Collider. Adam is a visiting scholar at UC Berkeley's Office for History of Science and Technology and lives in California.

“The stories that science tells about the world filter out into the wider culture, changing the way that we look at the world around us and our place in it. The discovery that the Earth was not at the center of the universe, Darwin’s theory of evolution, the Big Bang and an expanding universe nearly 14 billion years old, containing hundreds of billions of galaxies, each containing hundreds of billions of stars—these ideas have radically altered humanity’s conception of itself.”
― Adam Becker, What Is Real?: The Unfinished Quest for the Meaning of Quantum Physics
6 likes
Like

“Science, done right, works hard to respect absolutely no authority at all other than experience and empirical data. It never succeeds entirely, but it comes closer and has a better track record than any other method we apes have found for learning about the world around us.”
― Adam Becker, What Is Real?: The Unfinished Quest for the Meaning of Quantum Physics
tags: empiricism, realism, science
2 likes
Like

“Heisenberg repeated his story about the German bomb program to anyone who would listen for the rest of his life. Goudsmit, who had access to the Farm Hall reports and had seen the pathetic remnants of the Nazi nuclear program firsthand, knew Heisenberg’s story was a fabrication. But, with the existence of the Farm Hall transcripts itself classified, Goudsmit could state only that Heisenberg was lying, without explaining how he knew. The first popular account of the Manhattan Project, Brighter Than a Thousand Suns, written by the Swiss journalist Robert Jungk in 1958, repeated Heisenberg’s story almost verbatim. So did The Virus House, the first book dedicated solely to the history of the German bomb program, which relied heavily on interviews from Heisenberg and his fellow former Farm Hall detainees. (The author, David Irving, was later revealed to be a Holocaust denier.)”
― Adam Becker, What Is Real?: The Unfinished Quest for the Meaning of Quantum Physics
1 likes
Like