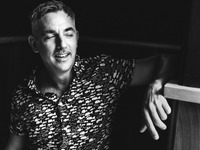 Rhode Island folks! I’ll be reading from “Correspondents” at Cranston Public Library on Oct. 22 at 7pm—and would love to meet you!

“She could feel the Melancholy Demon bearing down.”
― Tim Murphy, Christodora
1 likes
Like

“Lying in the hotel bed, Hector conceded that, all through ’93, ’94, and ’95, an ever-widening river of good data, mixed with a steady ambient wash of self-importance, had anesthetized his grief. He’d needed that. But now a maw of emptiness and rage was opening beneath him. Idly, he rubbed his bare, trimmed chest beneath the sheets. He’d faithfully hit the gym through these past years of high-level consultancy, grunting out his misery over barbells and machines. His chest was broad and he wished beyond anything that the arm caressing it at this moment was Ricky’s, not his own. But that sunny, silly cutie, like a blond sliver of sunshine on the timeline that Hector envisioned as his life, had missed the drawbridge, along with Issy and Korie and a baleful lot of others. It had all happened in the very, very worst years of sickness and death, Clinton’s first term, overwhelming loss mingled confusingly with tidings of the coming respite.”
― Tim Murphy, Christodora
1 likes
Like

What will be our February 2019 Open Pick?

Remember, if you vote for a book and it wins, you are implicitly promising to read the book and participate in the discussion. If you fail to participate, drones will be launched and 6,789 copies of Who Moved My Cheese? will be lumped upon your home.

The poll will be open through December 31st. (Note: Check for availability before voting. You can change your vote at any time prior to the closing of the poll.) Discussion will begin on February 1st.

THE Group for Authors! — 11762 members — last activity 1 hour, 7 min ago
This is a group for authors to discuss their craft, as well as publishing and book marketing.

Hi Tim, Yes, I loved 'Correspondents' and highly recommend it! It was picked for me by Willoughby books just in case you want to know.

Hi Tim -- Thanks for your note. I didn't know about your newest novel, "Correspondents." I'll check it out!

Tim, I'm tickled you asked to be my friend. I don't think I'm going to make Boston this year, but I'm working on coming to Massachusetts next spring. Christadora is already on my TBR and I'm eager to get to it. AND, I posted on FB already about your marvelous book (on two sites for readers including Booktopians). I've notified Northshire that his might be a good book for next Spring's Booktopia. I don't really have any pull with them, but the person in charge listened and responded to my suggestion. I was tickled that Jennifer Entwistle contacted you to be a part of Newburyport. We WILL meet up at some time. Tell Stephen that I said, "Hi."

Tim - I am honored to be your friend. I found both Christadora and Correspondents extremely well written, interesting to read and compelling in numerous ways. Believe it or not, I am a 68 year old woman who lives on a ranch in Texas (a lawyer for many years, but now a fully time rancher and reader). The closest city is Houston, so I will watch to see if you ever get there. I am not active on Twitter or Instagram, but I have passed your books on to a number of younger people who are so active - and I will tell them to speak up. I am sorry Correspondents isn't getting the press it deserves - it is a wonderful, moving and right on point work.