For any new authors out there I was recently interviewed for The Proofreader's Parlour. We talked about writing, publishing and things I'd learnt along the way so far. For the full article click here. It is worth checking out just for the spooky gif in the header!
Like  •  0 comments  •  flag

Dark Nights of the Soul: A Nathen Turner Thriller So the months have turned into weeks and now it is only 14 days until the release of the second Nathen Turner thriller, Dark Nights of the Soul. Set in the remote Scottish highlands, a story of ancient witchcraft and spooky goings on unfolds at a heart-pounding pace, making it a great read for those long winter nights ahead.

Now available for pre-order in hardback, paperback and Ebook editions.Click here to learn more.
1 like · Like  •  0 comments  •  flag

Haunting returns to the Highlands this Halloween

Nathen Turner returns this Halloween in the new supernatural thriller Dark Nights of the Soul. Set in the remote Scottish Highlands, the story tells of an MS patient who seeks solace in the wild, only to be faced with a different threat to his health – witchcraft.

More details and the book trailer can be found by clicking here.
Like  •  0 comments  •  flag

Writing a new chapter in life

Article out today about me and my writing – thanks to The Star and Mel Hewitt – helping to raise the profile of MS Awareness Week in the UK: View online here
Like  •  0 comments  •  flag

An author's life, living with MS

I know there are many authors, like me, who live with a disability. Here in the UK, the MS Trust have a week every year to raise awareness of multiple sclerosis. Appropriately called MS Awareness Week, it runs from 25 April until 1 May in 2016. I've been trying to do my bit to support the MS Trust over the years and even did a charity trek on the Great Wall of China to raise funds before my mobility issues got the better of me.

I've cut and pasted below a press snippet about my writing and how my MS has affected me in the hope it may help others in a similar situation:

After living with multiple sclerosis for over twenty years, author Andrew Langley has turned to the supernatural for help. His debut novel, Mirror on the Soul, tells the story of a fake psychic medium that makes contact with the spirit world by mistake – a mistake that has humorous, and frightening, consequences.

Andrew now creates his new adventures on paper as his declining health prevents him doing his day job as a photojournalist. ‘I had to come up with a new way to make a living when my MS deteriorated,’ says Andrew. ‘I just couldn’t sit at home watching the world go by – so I sat and wrote a novel instead.’ The story starts in Las Vegas before moving to the suitably haunting setting of Whitby, both locations Andrew knows well from his earlier career.

According to the Multiple Sclerosis Trust, more than 100,000 people in the UK have MS. The disease is incurable and affects the central nervous system, creating a variety of symptoms including blindness, spasms, chronic fatigue and severe mobility issues. Andrew has faced all of these to varying degrees.

‘Back in 2007, I did a charity walk along the Great Wall of China for the MS Trust. I can’t do that type of thing any more due to the progress of my MS,’ comments Andrew. ‘But just because a part of your life is over, it doesn’t mean everything has to stop. You can, literally, write a new chapter for yourself.’ 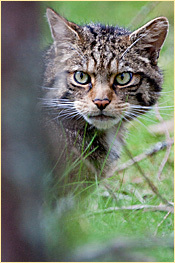 Looks like a domestic tabby cat? Nope, this is the Tiger of the Highlands, the incredible Scottish wildcat, photographed in the wild amidst the dense pines of its native mountain terrain. The first time I ever saw one was in captivity at a wildlife park in the Cairngorms. The keeper, who acted as guide, warned me not to get too close - the previous day the cat in question had clawed through the mesh glove of its handler, leaving him with a nasty scar on his palm.

Years later I was lucky enough to photograph them in the wild and remain in awe of this beast of the north. Now only about four hundred pure bloods remain, and to date no-one has managed to domesticate them. Wild by nature and a survivor of the last Ice Age, they remain an enigma, a true wild spirit of Scotland. My experience getting up close and personal to such a magnificent animal inspired the presence of the wildcat in the second Nathen Turner novel, "Dark Nights of the Soul" due in 2016, and I hope I've done them justice. For several years I worked on a project to raise awareness of the wildcat's plight as our rarest native predator. If you'd like to know more about the latest conservation efforts for this special beast click here.
1 like · Like  •  0 comments  •  flag 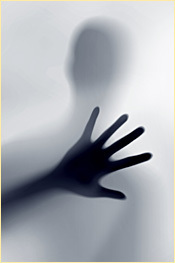 Investigating the supernatural can be an incredibly frustrating experience don't you think? I mean if ghosts really exist how come Facebook and other social media isn't littered with images of all the sightings we hear about in the media? The truth is most of the stuff caught on camera is objects falling over or statues turning on their own, all of which can be easily faked with today's plethora of electronic devices. So is it right to be sceptical? Well yes and no.

Most people I've met over the years have had something unexplained happen to them - they think of a friend, and then they get a call from them, or they get a premonition something is wrong only to find a relative is gravely ill. Many studies have been done on so called Extra Sensory Perception (ESP) but none have proven conclusively it exists. Repeat tests with the same subjects in stricter conditions have not proven the phenomena is any more than within the parameters of probability or chance. Still I'd like to think it is possible that we can sense things with some aspects of our minds that remains, as yet, undiscovered.

What about Tarot cards? Can they really foretell the future? Well obviously not on their own, they are just pieces of card with pictures on them. They need an interpreter, a reader if you like, who can see beyond the fancy drawings and look deeper for what they could mean or represent for an individual. In my experience, good readers help provide deeper insights into challenges people face in their day-to-day lives and give them a better understanding of their potential. Armed with this new information, the sitter now has the freedom to create a new future for themselves through positive change, guided by the insights. In other words, they take more responsibility for their life and make better decisions because of the reading. I'm a big fan of Tarot for personal development, when it is down well by an experienced reader.

I remember spending the night sitting in a photographic hide in the middle of a remote forest. By about 2 a.m. I found myself tuning in to all the night noises, pine twitching in the breeze and the thunder of a nearby river in full spate.Then I heard a guttural bark echoing through the woods that made my blood freeze. Not daring to move, I clung onto my camera and tried to slow my breathing so as to make as little noise as possible. Then a roe deer crashed through the pine ahead and disappeared into the night. I'd been half scared to death by Bambi's distant relative, calling to its friends in the night. A similar thing happened the first time I heard the cry of foxes in the mating season. Again it was the middle of the night and unnatural screams echoed all around me. After a brief silent stalk I was rewarded with a moonlit view of my vulpine night-time companions. Pitch blackness seems to have a strange way of playing with the mind. Without the other senses, perhaps all we have left is our imagination, and with that in play, maybe we can make ourselves believe we've seen or heard anything.

I live in hope that eventually we'll discover the universe is such a strange and wonderful place, it will surpass even our wildest imagination. If you like stories with a spiritual, psychic or supernatural theme, you can find the first in the Nathen Turner series by clicking this link: Mirror on the Soul
1 like · Like  •  0 comments  •  flag 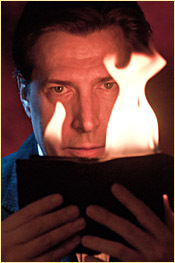 Yes, this is me shooting fire out the top of a leather wallet. See the weird shape of the flame on the right? To me it looks just like I'd expect a ghostly apparition to look. Strange eh?

I've studied and performed magic, well conjuring tricks to be precise, for as long as I can remember. From school friends to professional performances, it has always been a part of my life. As a young boy I was fascinated by the thought that there was more to life than we can sense, if only we knew how to tap into it.

The thirst for pushing the boundaries of the unknown led me to study physics and astrophysics, trying to get my head around quantum mechanics and other equally mind-bending theories. But still, there seemed to be something missing. Something unexplained.

In my early teens, one of my brothers returned home with a deck of Tarot cards and I became fascinated by the imagery (and a little scared at the same time). "What did these strange drawings mean", I wondered for hours trying to make sense of them. It wasn't until years later that I truly got a sense of these mythical cards and their power - but more of that in a future blog post.

Things took on an even weirder direction when I visited a fortune teller for the first time at the seaside resort of Great Yarmouth, here in the UK. A beautiful lady with flowing black hair asked me to hold onto a crystal ball, but under no circumstances say anything about myself. Carefully she took the crystal from me and gazed into its depths without looking up at me once. For the next twenty minutes she described my work, my family, and my relationships with such accuracy I was so spooked I headed straight to the nearest pub. The thing that really got me, was she never asked me one thing. Nothing. I held the ball and then she spoke, simple as that. Enter my fascination with the psychic community - a one that has stayed with me ever since.

Nobody can dispute the much publicised cases of psychic fraud, but for the sake of my childhood fascinations I truly hope there is something to it after all. This conflict of proven psychic swindling against the lack of proof on the other side of genuine ability, spawned the idea of the Nathen Turner novels. What if a fraudulent psychic came into contact with a real supernatural being? What would they do? How would they react? So "Mirror on the Soul" was born, and I hope goes some way to answering the question.You can find details of this novel by clicking on this link: Mirror on the Soul
1 like · Like  •  0 comments  •  flag