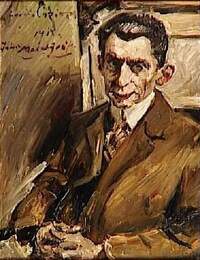 Born
in Reșița, Romania
June 10, 1867
Died
June 05, 1935
Genre
Art, Nonfiction
edit data
Julius Meier-Graefe (1867-1935) was a German art critic and novelist. His writings on Impressionism, Post-Impressionism as well as on art of earlier and more recent generations, with his most important contributions translated into French, Russian and English, are considered to have been instrumental for the understanding and the lasting success of these artistic movements.

· 308 ratings · 34 reviews · 65 distinct works • Similar authors
More books by Julius Meier-Graefe…
Quotes by Julius Meier-Graefe  (?)
Quotes are added by the Goodreads community and are not verified by Goodreads. (Learn more)
“Millet's Sower is an invented sower who is burdened with the artist's thoughts; he is but a creeping shadow on a ploughed field which is only a field of the imagination. Another peasant ploughs near the horizon with his oxen, or rather there is a silhouette plough with motionless animal silhouettes, in front of a sky of canvas in which birds cut out of paper attempt to flap their immovable wings. In Vincent's picture a peasant strides across his field, you can feel the very substance of the air. The strength of his motion carries you with him. Hundreds of sowers were embodied in one figure. He strides along, not for you, not for art, not for Van Gogh, but for his work, with every nerve stretched to its purpose and every limb and every rag on his body forming part of his action. The field is ready to receive the seed. There he ploughs, here he sows, and in the background the ploughing still continues. Not a detail in the action is left obscure or isolated. The animals, the earth, the man, everything is but a part of growth, and the air is heavy with the coming harvest. He strides there, not for to-day or to-morrow, but as he strode a thousand years ago as a peasant of Provence, as a Greek, or as a tiller of the soil of Egypt. Sowing is the symbol of eternity.”
― Julius Meier-Graefe, Vincent Van Gogh: A Biography
0 likes
Like

“Genius and lunacy were well known to be next-door neighbours.”
― Julius Meier-Graefe, Vincent Van Gogh: A Biography
0 likes
Like

“The limitations of necessity made him free. He loved the necessity which exercised his faculties, and brought before his vision what he loved to see. he could have done nothing in other surroundings. Prostitutes were his sisters, and working men his brothers. Like them he was an outcast- an outcast who knew the peace of that despair which has long since given up useless strife.”
― Julius Meier-Graefe, Vincent Van Gogh: A Biography
0 likes
Like