,
Discover new books on Goodreads
See if your friends have read any of Algis Budrys's books 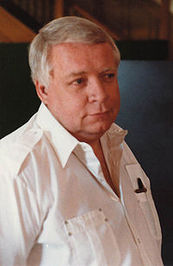 Budrys was educated at the University of Miami, and later at Columbia University in New York. His first published science fiction story was The High Purpose, which appeared in Astounding Science Fiction in 1952. Beginning in 1952 Budrys worked as editor and manager for such science fiction publishers as Gnome Press and Galaxy Science Fiction. Some of his science fiction in the 1950s was published under the pen name "John A. Sentry", a reconfigured Anglification of his Lithuanian name. Among his other pseudonyms in the SF magazines of the 1950s and elsewhere, several revived as bylines for vignettes in his magazine Tomorrow Speculative Fiction, is "William Scarff". He also wrote several stories under the names "Ivan Janvier" or "Paul Janvier." He also used the pen name "Alger Rome" in his collaborations with Jerome Bixby.

Budrys's 1960 novella Rogue Moon was nominated for a Hugo Award, and was later anthologized in The Science Fiction Hall of Fame, Volume Two (1973). His Cold War science fiction novel Who? was adapted for the screen in 1973. In addition to numerous Hugo Award and Nebula Award nominations, Budrys won the Science Fiction Research Association's 2007 Pilgrim Award for lifetime contributions to speculative fiction scholarship. In 2009, he was the recipient of one of the first three Solstice Awards presented by the SFWA in recognition of his contributions to the field of science fiction.

Budrys was married to Edna Duna; they had four sons. He last resided in Evanston, Illinois. He died at home, from metastatic malignant melanoma on June 9, 2008. ...more

“I have to have time to think. Why does time run on while a man thinks?”
― Algis Budrys
5 likes
Like

“When you play the past over and over in your head, you can begin to see things in it that you missed when you were living it. You come to realize that there were moments when one word said differently, or one thing done at just the right time, would have changed everything.”
― Algis Budrys, Who?
2 likes
Like