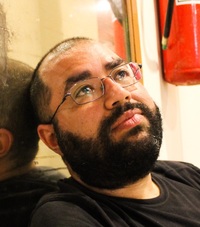 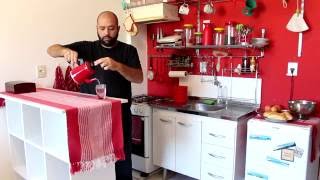 “He was forever wallowing in the mire, dirtying his nose, scrabbling his face, treading down the backs of his shoes, gaping at flies and chasing the butterflies (over whom his father held sway); he would pee in his shoes, shit over his shirt-tails, [wipe his nose on his sleeves,] dribble snot into his soup and go galumphing about. [He would drink out of his slippers, regularly scratch his belly on wicker-work baskets, cut his teeth on his clogs, get his broth all over his hands, drag his cup through his hair, hide under a wet sack, drink with his mouth full, eat girdle-cake but not bread, bite for a laugh and laugh while he bit, spew in his bowl, let off fat farts, piddle against the sun, leap into the river to avoid the rain, strike while the iron was cold, dream day-dreams, act the goody-goody, skin the renard, clack his teeth like a monkey saying its prayers, get back to his muttons, turn the sows into the meadow, beat the dog to teach the lion, put the cart before the horse, scratch himself where he ne’er did itch, worm secrets out from under your nose, let things slip, gobble the best bits first, shoe grasshoppers, tickle himself to make himself laugh, be a glutton in the kitchen, offer sheaves of straw to the gods, sing Magnificat at Mattins and think it right, eat cabbage and squitter puree, recognize flies in milk, pluck legs off flies, scrape paper clean but scruff up parchment, take to this heels, swig straight from the leathern bottle, reckon up his bill without Mine Host, beat about the bush but snare no birds, believe clouds to be saucepans and pigs’ bladders lanterns, get two grists from the same sack, act the goat to get fed some mash, mistake his fist for a mallet, catch cranes at the first go, link by link his armour make, always look a gift horse in the mouth, tell cock-and-bull stories, store a ripe apple between two green ones, shovel the spoil back into the ditch, save the moon from baying wolves, hope to pick up larks if the heavens fell in, make virtue out of necessity, cut his sops according to his loaf, make no difference twixt shaven and shorn, and skin the renard every day.]”
― François Rabelais, Gargantua and Pantagruel
0 likes
Like

“The simple truth is that most people aren’t out to get you. We are so bad at spotting deception because it’s better for us to be more trusting. Trust, and not adeptness at spotting deception, is the more evolutionarily beneficial path.”
― Maria Konnikova, The Confidence Game: Why We Fall for It . . . Every Time
2 likes
Like

“The Unknown sometimes holds surprises for the spirit of man. A sudden rent in the veil of darkness will momentarily reveal the invisible and then close up again. Such visions sometimes have a transfiguring effect, turning a camel driver into a Mohammed, a goat girl into a Joan of Arc. Solitude brings out a certain amount of sublime exaltation.”
― Victor Hugo, The Toilers of the Sea
1 likes
Like

“It was a lodging for the kind of people who have no permanent lodging. In all towns, and particularly in seaports, there is always to be found, below the general population, a residue. Lawless characters—so lawless that even the law sometimes cannot get its hands on them—pickers and stealers, tricksters living by their wits, chemists of villainy continually brewing up life in their crucibles; rags of every kind and every way of wearing them; withered fruits of roguery, bankrupt existences, consciences that have declared themselves insolvent; the incompetents of breaking and entering (for the big men of burglary are above all this); journeymen and journeywomen of evil, rascals both male and female; scruples in tatters and out at elbow; scoundrels who have sunk into poverty, evildoers who have had little reward from their work, losers in the social duel, devourers who now go hungry, the low earners of crime, beggars and villains: such are the people who form this residue. Human intelligence is to be found here, but it is bestial. This is the rubbish heap of souls, piled up in a corner and swept from time to time by the broom that is called a police raid. La Jacressarde was a corner of this kind in Saint-Malo.”
― Victor Hugo, The Toilers of the Sea
0 likes
Like

“Dissimulation is an act of violence against yourself. A man hates those to whom he lies.”
― Victor Hugo, The Toilers of the Sea
3 likes
Like