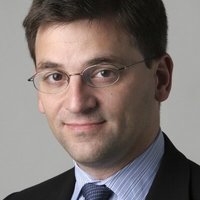 Born
July 02, 1967
Website
http://www.nytimes.com/by/peter-baker
Twitter
peterbakernyt
Genre
Politics, History, Nonfiction
edit data
There is more than one author with this name in the database.

Peter Baker has been a journalist for the Washington Post and the New York Times. He covered President Bill Clinton's impeachment trial, resulting in the book The Breach. As the Post's Moscow bureau chief, he wrote the book Kremlin Rising. He is married to the journalist Susan Glasser.

“For years, the suspicion that Mr. Putin has a secret fortune has intrigued scholars, industry analysts, opposition figures, journalists and intelligence agencies but defied their efforts to uncover it. Numbers are thrown around suggesting that Mr. Putin may control $40 billion or even $70 billion, in theory making him the richest head of state in world history. For all the rumors and speculation, though, there has been little if any hard evidence, and Gunvor has adamantly denied any financial ties to Mr. Putin and repeated that denial on Friday. But Mr. Obama’s response to the Ukraine crisis, while derided by critics as slow and weak, has reinvigorated a 15-year global hunt for Mr. Putin’s hidden wealth. Now, as the Obama administration prepares to announce another round of sanctions as early as Monday targeting Russians it considers part of Mr. Putin’s financial circle, it is sending a not-very-subtle message that it thinks it knows where the Russian leader has his money, and that he could ultimately be targeted directly or indirectly. “It’s something that could be done that would send a very clear signal of taking the gloves off and not just dance around it,” said Juan C. Zarate, a White House counterterrorism adviser to President George W. Bush who helped pioneer the government’s modern financial campaign techniques to choke off terrorist money.”
― Peter Baker
tags: obama, putin, the-new-york-times, ukraine
1 likes
Like

“to”
― Peter Baker, Days of Fire: Bush and Cheney in the White House
0 likes
Like

“WASHINGTON — President Trump has boasted at various points that he has “one of the great memories of all time” or even “the world’s greatest memory.”

But the world’s greatest memory failed him repeatedly when prosecutors asked him those classic questions from decades of presidential scandals — what did he know and when did he know it?

Mr. Trump refused for more than a year to be interviewed by the special counsel, Robert S. Mueller III, and in the end agreed to respond to questions only in writing. Even then, with the help of his lawyers, the president found it difficult to summon details from his presidential campaign in 2016 that might shed light on what happened.

More than 30 times, he told the prosecutors that he had no memory of what they were asking about, employing several formulations to make the same point.

'I do not remember.'

'I have no recollection.'

'I have no independent recollection.'

'I have no current recollection.”
― Peter Baker
0 likes
Like

This poll will examine the choices for the William Jefferson Clinton reading selection which will be the next President covered in the Presidential Series. The order for the Presidents selected was determined by the group membership.

This selection will begin on June 13th and will continue for three - four months - depending upon the length of the selection.

We have added all of the books nominated on the William Jefferson Clinton thread and a few others. However, if you do not see your favorite book on this list; then just comment or pop me a note and I will immediately add it to this poll.

You can always change your vote at any time; so nothing is lost. Some of the Clinton books deal with only a certain period of his life, some may be multi-volume (if that is ever the case - I always add both separately), some deal with other topics too; some are all encompassing, others deal with specific events in Clinton's life or presidency and others are by the man, himself and some are about Hillary.

Before making your selection, please try to look up your choice and make sure it really is a book you are interested in; do not be lured in by the title. Also, check out the author and what others have said about the book before you (reviewers who you trust). Then of course, make your selection.