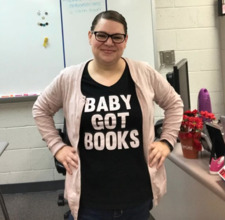 This will prevent Amanda from sending you messages, friend request or from viewing your profile. They will not be notified. Comments on discussion boards from them will be hidden by default.
Sign in to Goodreads to learn more about Amanda.

“Over and over in the play my character says, "I'm thirty-two years old," as if that should explain everything that's wrong in her life. I don't know what it's like to be thirty-two, but I can imagine. I imagine she means she's stuck in an in-between time, she's at an age that isn't a milestone but more of a no-man's-land, an age where she's feeling like her hopes are fading.”
― Lauren Graham, Someday, Someday, Maybe
22 likes

“There’s only one rule I know of—Goddam it, you’ve got to be kind.”
― Kurt Vonnegut, If This Isn't Nice, What Is?: Advice for the Young
26 likes

“Because high school only comes around once, and I would hate to look back and think I didn’t make the most of every moment because I was scared of what other people thought. Other people never think that much about you anyway. Eleanor Roosevelt said that.”
― Sarah Strohmeyer, Smart Girls Get What They Want
15 likes

“Maybe all that matters is that they love each other, still, the way people who have known each other will always love each other.”
― Beth Kephart, Small Damages
4 likes

“I don’t think I’m any good at this. Boy–girl. Person–person. I don’t trust anybody. Not anybody. And the more that I care about someone, the more sure I am they’re going to get tired of me and take off.”
― Rainbow Rowell, Fangirl
171 likes

Polls voted on by Amanda