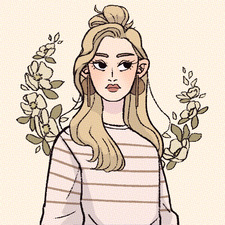 This will prevent Nikoline from sending you messages, friend request or from viewing your profile. They will not be notified. Comments on discussion boards from them will be hidden by default.
Sign in to Goodreads to learn more about Nikoline.

“I remember the stars that night. They were like salt against the sky, like someone spilled the shaker against very dark cloth. That mattered to me, their accidental beauty.”
― Kathleen Glasgow, Girl in Pieces
126 likes

“We must all face the choice between what is right and what is easy, Grace. Reading Harry Potter is what is right.”
― Krystal Sutherland, Our Chemical Hearts
tags: harry-potter-reference
63 likes

“Sometimes she wondered how it were possible to be so far from the sea and still feel as if she were drowning.”
― Jojo Moyes, Foreign Fruit
0 likes

Virginia Woolf put stones in her pocket
and wandered off into the sea.
My mother always said
I have rocks in my head
I wonder what will become of me?”
― Pamela August Russell

“A man who under the influence of mental pain or unbearably oppressive suffering sends a bullet through his own head is called a suicide; but for those who give freedom to their pitiful, soul-debasing passions in the holy days of spring and youth there is no name in man's vocabulary. After the bullet follows the peace of the grave: ruined youth is followed by years of grief and painful recollections. He who has profaned his spring will understand the present condition of my soul. I am not yet old, or grey, but I no longer live. Psychiaters tell us that a solider, who was wounded at Waterloo, went mad, and afterwards assured everybody - and believed it himself - that he had died at Waterloo, and that what was now considered to be him was only his shadow, a reflection of the past. I am now experiencing something resembling this semi-death..”
― Anton Chekhov, The Shooting Party
tags: emotions, feelings, mental-health, mental-illness, mentality, sadness
7 likes

The Feminist Orchestra Bookclub — 4834 members — last activity Dec 11, 2021 11:07AM
Discover and recommend more feminist reads here: https://www.goodreads.com/list/show/96419.The_Feminist_Orchestra_Potential_Reading_List We're also o Discover and recommend more feminist reads here: https://www.goodreads.com/list/show/96419.The_Feminist_Orchestra_Potential_Reading_List We're also on twitter: https://twitter.com/femorchestra #feministorchestra Sick of sexist comments from people online and being accused of banging my 'feminist drum' by intolerant people I have decided to start a Feminist Bookclub on Booktube. All engagement is welcome though, on youtube, on blogs and on goodreads. This is not 'my' bookclub, however, it belongs to all of us. I strongly believe feminism, which means equality of all sexes in society, not to be about the individual but about everyone and to be a group movement. Therefore, I want this bookclub to be a group. We read one book over the course of two months throughout the year. At the end of the first month there will be a pre-scheduled twitter chat on themes relating to that month's book, which will not require you to have finished the book. A video review will then be posted on Jean (bookishthoughts) or Lauren's (readsanddaydreams) channel on youtube. If you also film a youtube review/discussion or write a review/discussion of the book on your blog please share it with us all by posting it in the reviews thread. Please use #feministorchestra on twitter, instagram and elsewhere so we can all share our posts, thoughts, discussion and book reviews Gender equality is at the heart of this book club so please recognise this in your behaviour. We do not exist to convince anyone of this but to discuss the nuances and individual issues presented by the literature we read. All fantastic name credit goes to Chelsea: https://www.youtube.com/channel/UCr5ozf3OVhcWVbr_f7ONJpw ...more

Lewis Carroll
author of: Alice's Adventures in Wonderland / Through the Looking-Glass
More…

Polls voted on by Nikoline