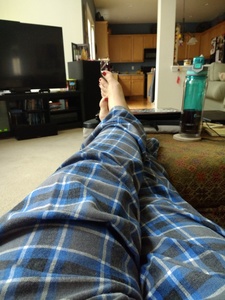 This will prevent Jenn from sending you messages, friend request or from viewing your profile. They will not be notified. Comments on discussion boards from them will be hidden by default.
Sign in to Goodreads to learn more about Jenn.

“The function of prayer is not to influence God, but rather to change the nature of the one who prays.”
― Soren Kierkegaard
tags: faith, god, prayer
3910 likes

“I love deadlines. I love the whooshing noise they make as they go by.”
― Douglas Adams, The Salmon of Doubt
tags: deadlines, humor, humour, work, writing
31404 likes

“Never put off till tomorrow what may be done day after tomorrow just as well.”
― Mark Twain
tags: humor, procrastination
33878 likes

“I'm selfish, impatient and a little insecure. I make mistakes, I am out of control and at times hard to handle. But if you can't handle me at my worst, then you sure as hell don't deserve me at my best.”
― Marilyn Monroe
tags: attributed-no-source, best, life, love, mistakes, out-of-control, truth, worst
154019 likes

“Saying 'I notice you're a nerd' is like saying, 'Hey, I notice that you'd rather be intelligent than be stupid, that you'd rather be thoughtful than be vapid, that you believe that there are things that matter more than the arrest record of Lindsay Lohan. Why is that?' In fact, it seems to me that most contemporary insults are pretty lame. Even 'lame' is kind of lame. Saying 'You're lame' is like saying 'You walk with a limp.' Yeah, whatever, so does 50 Cent, and he's done all right for himself.”
― John Green
tags: humor, nerdfighters
21992 likes

What's the Book You Can't Wait to Read This Summer?

Polls voted on by Jenn